Victory! Democrats Forced To CANCEL ‘Jumah At The DNC’ Due To Public Outrage

It looks as if they are desperately trying to cover their capitulation to Islamic supremacists such as Jumah at the DNC Grand Imam Siraj Wahhaj, who took the Blind... 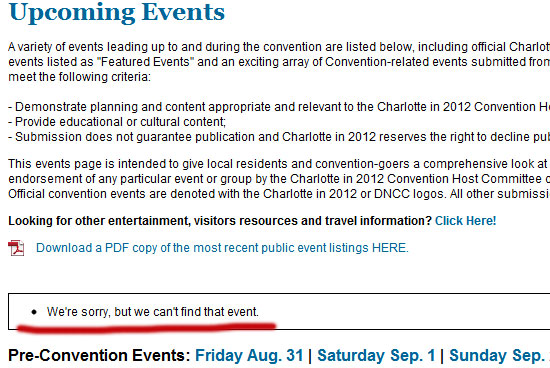 The event has mysteriously disappeared from the official DNC 2012 Convention website.
by Geoffrey Grider August 31, 2012
NOW THE END BEGINS SHARE:

The power of the blogosphere

NTEB was one of the first to report to you that the DNC 2012 was sponsoring an event to kick-off thier convention called “Jumah At The DNC 2012”. This was to be a 2-hour Muslim prayer festival to Allah. We ran the following information on August 28:

“The Democratic National Committee is raising a number of eyebrows after choosing to proceed with hosting Islamic “Jumah” prayers for two hours on the Friday of its convention, though it denied a Catholic cardinal’s request to say a prayer at the same event. Up to 20,000 people are expected to attend the Friday prayers and Jibril Hough, a spokesman for the Bureau of Indigenous Muslim Affairs (BIMA), said the purpose of the event is to hold political parties accountable for the issues faced by Muslim-Americans.”

Our hope, when we run stories like this, is that the public will become informed and raise their voices in opposition and have events like this stopped. It seems that this is exactly what has happened as the event has mysteriously disappeared from the official DNC 2012 website page that had listed the event.

The event has mysteriously disappeared from the official DNC 2012 Convention website.

“It looks as if they are desperately trying to cover their capitulation to Islamic supremacists such as Jumah at the DNC Grand Imam Siraj Wahhaj, who took the Blind Sheikh, Omar Abdel Rahman, around to speak at mosques in New York and New Jersey while the Blind Sheikh was plotting to murder tens of thousands of Americans in the World Trade Center, the Lincoln Tunnel and the Holland Tunnel.” source – Atlas Shrugs

So keep it up, people, and let your voice be heard. This website, and dozens more like it, can and do make a huge difference by keeping you informed with what is really going on in the world around you. And if this is just sleight-of-hand by the DNC in removing it from their website but not actually cancelling the event, NTEB will be right out front in reporting on that, too…in a lost and dying world we MUST remain ever vigilant… Stay tuned!…