Anjem Choudary said Pamela Geller should be put before a court and tried, and she would end up punished. Geller shot back, “To blame me and say that my... 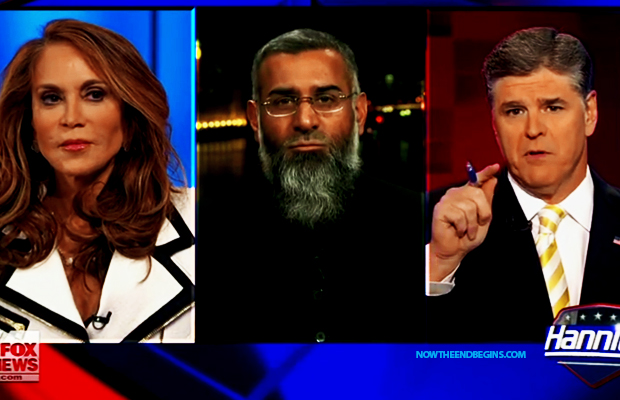 Islamic Imam Anjem Choudary told Pamela Geller tonight that she should be slaughtered for her Texas cartoon contest.

“And he will be a wild man; his hand will be against every man, and every man’s hand against him; and he shall dwell in the presence of all his brethren.” Genesis 16:12 (KJV)

Muslim cleric Anjem Choudary, on Fox News yesterday, not only called for Sharia Law over all of America, he bluntly stated that the Jewish Pamela Geller was “worse than a pig”, and that she deserved to die. Welcome to another church service of the “religion of peace”.

Choudary said Geller should be put before a court and tried, and she would end up punished. Geller shot back, “To blame me and say that my cartoons are controversial… murdering cartoonists is controversial.”

They got into a shouting match and Choudary told her she “knew the consequences.” They continued fighting, Choudary went off on a tangent about the U.S. “murdering innocent people,” and Hannity ended by calling him “evil and pathetic.”

The best exchange of the interview happened when Pam, who was constantly being interrupted by Choudary, said ““I’m talking, sir… I know you’re used to stepping over women but you’re not going to have it here.”’

That was awesome, she has more guts than any 10 of our political leaders combined. She’s as brave as she is beautiful.

We here at NTEB ask all Christians to pray for our friend Pamela Geller, that the Lord and Saviour Jesus Christ would keep her safe.