Jewish Congresswoman Debbie Wasserman Schultz, a US representative from Florida, announced on CNN on Sunday, September 6, 2015 that she is endorsing the Iran deal. Debbie Wasserman-Schultz had said... 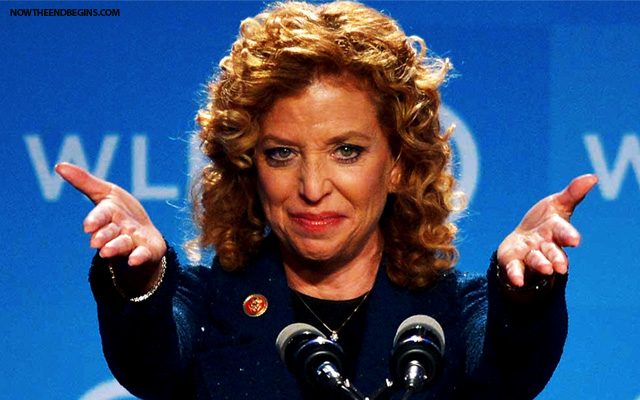 Debbie Wasserman-Schultz Sells Out the Jews on Iran Nuclear Pact

EDITOR’S NOTE: The curious phenomena of the liberal American Jew, only one generation removed from the Auschwitz death camps of Hitler’s Holocaust, who stab Israel in the back every chance they get has always amazed me. Today, Debbie Wasserman-Schultz has validated Obama’s Iranian death pact that guarantees nuclear weapons will be flying towards Israel sooner rather than later. She is a double traitor, selling out the American people and betraying her fellow Jews just like George Soros did with the Nazis in WWII.

Pamela Geller says that Jewish Congresswoman Debbie Wasserman Schultz, a US representative from Florida, announced on CNN on Sunday, September 6, 2015 that she is endorsing the Iran deal. Debbie Wasserman-Schultz had said she will base her decision on “my Jewish heart.”

She’s the head of the DNC — the party of treason. This faux Jew is not giving that up, no matter how much blood she gets on her hands. I blame the people of Florida for re-electing this notorious kapo. She has been Obama’s organ grinder’s monkey for years.

She then pretended to cry when ace reporter Jake Tapper asked her what she will say when remembered for selling out Israel. Like all traitor Jews, she lied. She claimed that Iran will be held to strict inspections. That’s laughable. They are self-inspecting.

This is not rocket science. Iran has vowed to annihilate Israel — it is a promise that goes back to the overthrow of the Shah by the murderous Mullahs. They have never had the means to do it. Obama’s nuclear pact changes that.

Cry Me A River

Schultz is now officially part of the group of the most notorious self-loathing Jews, joining Noam Chomsky, Norm Finkelstein, et al in infamy. The head of the Democratic Party, Rep. Debbie Wasserman Schultz, D-Fla., choked up while discussing her “gut wrenching” decision to vote in favor of the Iran nuclear deal.

George Soros: Helping the Nazis “Was The Happiest Time of my Life”

“There’s nothing that’s more important to me, as a Jew, than to ensure Israel’s existence is there throughout our generations,” she said Sunday, choking back tears. Wasserman Schultz announced her vote for the deal, which will ease economic sanctions in return for Iran scaling back its nuclear program, on CNN’s “State of the Union” and in an op-ed for the Miami Herald.

Holding back tears, Wasserman Schultz said that in her op-ed, she talks about her “Jewish heart and how important this [decision] was to me … as a Jewish mother.” source