If after reading this, there is even the slightest trace of doubt in your mind that Obama is a Pro-Muslim who desires to destroy our Constitution and create a... 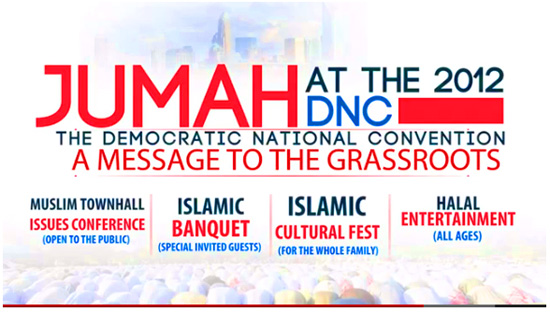 Obama is telling you that a Pro-Sharia Law push is coming to America.
by Geoffrey Grider August 28, 2012
NOW THE END BEGINS SHARE:

If after reading this, there is even the slightest trace of doubt in your mind that Obama is a Pro-Muslim who desires to destroy our Constitution and create a Sharia Law American Caliphate, then you, my friend, are an absolute idiot. The Jumah At The DNC is a clarion call, by Muslims, to a spiritual war leading to a physical war against the sovereignty of the United States of America. And your president, Barack HUSSEIN Obama is leading the charge. Obama is so confident now, and so convinced that he can get away with it that he has the audacity to openly and brazenly open his convention with a 2 hour prayer to the moon god Allah, and you, the American taxpayer are footing the bill for the whole thing.

From The Blaze: The Democratic National Committee is raising a number of eyebrows after choosing to proceed with hosting Islamic “Jumah” prayers for two hours on the Friday of its convention, though it denied a Catholic cardinal’s request to say a prayer at the same event.

Obama is telling you that a Pro-Sharia Law push is coming to America. The leaders of this event – Jibril Hough and Imam Siraj Wahhaj are not moderates. They are radicals. These individuals embrace Islamist supremacy and have demonstrated support for radical ideologies.

Up to 20,000 people are expected to attend the Friday prayers and Jibril Hough, a spokesman for the Bureau of Indigenous Muslim Affairs (BIMA), said the purpose of the event is to hold political parties accountable for the issues faced by Muslim-Americans.

In particular, the event will target the Patriot Act, the NYPD, the National Defense Authorization Act, and anti-Shariah sentiment.  And while Muslim-Americans undeniably face distinct challenges, those who are well-informed on the dangers of radical Islam are expressing their doubts about the event.

Dr. Zuhdi Jasser, a devout Muslim and the Founder and President of the American Islamic Forum for Democracy, wrote:

The leaders of this event – Jibril Hough and Imam Siraj Wahhaj are not moderates. They are radicals. These individuals embrace Islamist supremacy and have demonstrated support for radical ideologies.

A quick Google search by the DNC would have shown them that Hough and Wahhaj are leaders in the separatist American Islamist movement. While they may be able to get a few thousand Muslims to attend the event, they are NOT going to be mainstream Muslims.  Most will likely come from Hough and Wahhaj’s radical networks that have long been entrenched in the Charlotte area. Make no mistake they are part of the Islamist movement.

Their jummah (group) prayer is…about empowering their Islamist and MB sympathetic groups into the very fabric of the political system so that Americans become anesthetized. We need American Muslims to speak up and marginalize these radicals. The DNC needs to understand and reject them because of their radical history and ideas.

The mosque of Jibril Hough, mentioned by Dr. Jasser, is owned by the North American Islamic Trust, which was named as an unindicted co-conspirator in the Holy Land Foundation trial as one of the entities “who are and/or were members of the U.S. Muslim Brotherhood.”

Siraj Wahhaj, the “Grand Imam” for Jumah at the DNC, is often considered a “moderate” because he was the first Muslim to give an invocation in the U.S. Congress, but as Robert Spencer notes, he has a number of troubling ties to dangerous radicals.  In the early 1990′s the man reportedly sponsored talks by “the Blind Sheikh” Omar Abdel-Rahman in New York and New Jersey mosques, and told his followers that the United States will fall unless it “accepts the Islamic agenda.”

Wahhaj elaborated, according to bestselling author Brigitte Gabriel, to say: “If only Muslims were clever politically, they could take over the United States and replace its constitutional government with a caliphate.”

He continued: “Take my word.  If 6-8 million Muslims unite in America, the country will come to us.”

When an imam like Siraj Wahhaj says “it his duty and our duty as Muslims to replace the US Constitution with the Quran…we need to speak up!” Dr. Jasser reiterated in response, adding that Americans “should be concerned” if this is who the DNC is “consorting with.”

Robert Spencer speculates that the Democrat National Committee is simply so “in thrall to multiculturalism” that “few, if any” are even aware of the radical connections.

“To raise any concerns about such a speaker would be ‘Islamophobic,’ violating every rule of the anti-American, anti-Western ethos that prevails among so many Democrats today,” Spencer writes.

He concluded: “There is about as much chance of that as there is of the Democrats ditching Obama and nominating David Horowitz as their candidate for President of the United States.” source – The Blaze