Obama's 4 and one half years of occupying the desk at 1600 Pennsylvania Avenue hide a sinister statistic - America has had 15 mass shootings since he became president,... 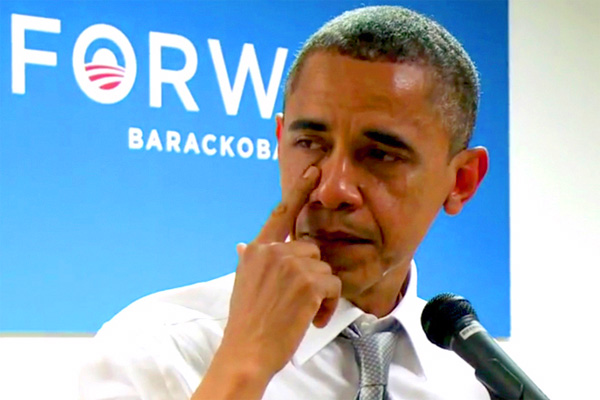 Watching Obama shed a tear seems about as natural a thing as John Travolta's hairline
by Geoffrey Grider May 24, 2014
NOW THE END BEGINS SHARE:

A most unusual legacy for the “peace president”

*This story was originally published on September 16th, 2013, and has been updated with this weekend’s mass shooting.

When you add up the numbers, a very disturbing picture of Obama’s presidency begins to unfold. He was elected as the “racial uniter”, the Nobel Peace Prize president who was going to “stop the rise of the oceans” and “heal our planet.”

Yet his 5 and one half years of occupying the desk at 1600 Pennsylvania Avenue hide a sinister statistic – America has had 16 mass shootings since he became president, and this weekend’s shooting in California now brings that total to 17. And since this is a list of shootings only, it does not include the Boston Bombing Massacre that Obama used to roll out martial law for a 24-hour period in Boston.

How do you explain that?

May 23, 2014 — University of California, Santa Barbara. — 7 dead (including gunman). A drive-by shooter went on a nighttime rampage near a Santa Barbara university campus that left seven people dead, including the attacker, and seven others wounded, authorities said Saturday. President Obama, as of this writing, has not issued an official statement or comment on the shootings.

September 16, 2013 — Navy Shipyard, Washington. — 10 shot and wounded (including gunman). Gunfire was reported fired at approximately 8.20 a.m. and police SWAT teams entered building number 197 at the base headquarters in an attempt to apprehend the shooter who is reported to be armed with an AR-15 assault rifle. President Obama gave an emotional address, calling for “meaningful action”