America Under Obama Coming Apart At The Seams

America is unraveling at a stunning speed and to a staggering degree, thanks to Obama. This decline is breathtaking, and the prognosis is dim.... 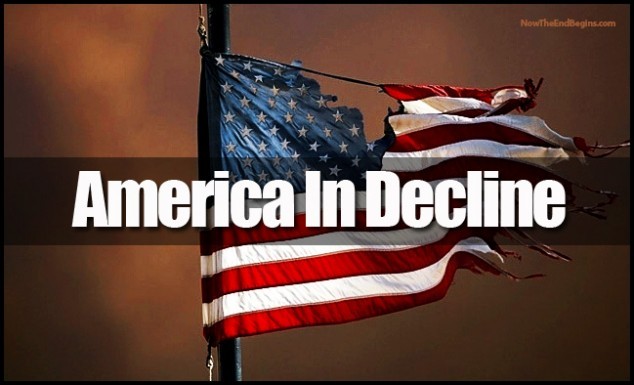 When NTEB started in back in 2009, one of our mission statements was to call attention to the betrayal of America by her leaders. Today’s story from the prestigious National Review agrees with us 100%.

America is unraveling at a stunning speed and to a staggering degree. This decline is breathtaking, and the prognosis is dim.

For starters, Obama now rules by decree. Reportedly for the 27th time, he has changed the rules of Obamacare singlehandedly, with neither congressional approval nor even ceremonial resolutions to limit his actions. Obama needs no such frivolities.

“That’s the good thing about being president,” Obama joked on February 10. “I can do whatever I want.” In an especially bitter irony, Obama uttered these despicable words while guiding French president François Hollande through Monticello, the home of Thomas Jefferson — a key architect of America’s foundation of limited government.

That very day, Obama decreed that the Obamacare mandate for employers with 50 to 99 workers would be postponed until 2016 (beyond an earlier extension to 2015), well past the November 2014 midterm elections. This eases the pressure on Democrats, whose campaigns would suffer if voters saw their company health plans canceled due to Obamacare’s unnecessary, expensive, mandatory benefits — e.g. maternity coverage for men.

So, by fiat, Obama has postponed the employer mandate. When Senator Ted Cruz (R., Texas) effectively tried to do this through legislation last fall, Democrats virtually lassoed and branded him.

Also by decree last week, Obama decided unilaterally to soften political-asylum rules. Refugees and other immigrants who provide terrorists “limited material support” now can come to America. So what if someone merely clothed and fed Mohamed Atta or Khalid Sheikh Mohammed? After all, garments and meals don’t blow up. Welcome to America, Mustafa!

Meanwhile, the Justice Department is working hard to revoke the asylum of and deport the Romeikes. This evangelical-Christian family was granted refuge in America to escape prosecution for homeschooling their children, which German law forbids.

So, Obama believes, those who are only somewhat helpful to deadly, anti-U.S. terrorists may become Americans, while religiously oppressed homeschoolers who face prison should get the hell out.

The transparent electoral motive that fuels so many of Obama’s executive orders seems unprecedented. The tone is also brand new. Obama’s predecessors have signed executive orders and, more or less, left it at that. But Obama pounds his chest as he does so. As he told Congress at last month’s State of the Union address: “America does not stand still — and neither will I. So wherever and whenever I can take steps without legislation to expand opportunity for more American families, that’s what I’m going to do.”

While appalled Republicans sat on their hands, Democrats stood up and shouted like equatorial, rubber-stamp parliamentarians: “Hooray! We are irrelevant!”

Meanwhile, as the American Enterprise Institute’s Marc Thiessen wrote in the February 10 Washington Post, new Congressional Budget Office figures show that Obamacare will reduce U.S. incomes by $70 billion annually between 2017 and 2024. The CBO also estimated that by 2021, Obamacare’s disincentives to hire and incentives not to work would slash labor hours by the equivalent of 2.3 million jobs.

Rather than dispute these figures, key Democrats embraced them.

“We want people to have the freedom to be a writer, to be a photographer, to make music, to paint,” said House Democratic leader Nancy Pelosi of California. She added that “people would no longer be job-locked by their [health] policies, but have the freedom to follow their passion.”

So, rather than expand economic growth and jobs, Democrats applaud as Americans stop working — to do watercolors, draft poetry, and take naps — while exhausted taxpayers foot the bill.

Clearly unafraid of Obama, Iranian warships for the first time are steaming toward America’s Atlantic maritime borders. Iranian Revolutionary Guards Corps navy commander Ali Fadayi said, “The Americans can sense by all means how their warships will be sunk with 5,000 crews and forces in combat against Iran and how they should find its hulk in the depths of the sea.” Tehran last week also aired fantasy videos of drones blasting a U.S. warship and bombing Tel Aviv. This is how Iran behaves while it negotiates with U.S. diplomats over “peaceful” uranium enrichment?

Nearby, embattled Syrians flee the city of Homs while they and their United Nations protectors dodge incoming mortar shells. This sorry spectacle has exposed Obama’s Syrian policy as a miserable flop. So does the fact that Syrian president Bashar Assad has handed over only 4 percent of the chemical weapons that his deal last September with Obama and Vladimir Putin was supposed to neutralize. According to GOP senators John McCain of Arizona and Lindsey Graham of South Carolina, Secretary of State John Kerry privately conceded to them that Obama’s approach in Syria has failed.

America liberated Afghanistan from a regime that hosted al-Qaeda, banned kites and recorded music, and built a bridge to the seventh century. And what thanks does the U.S. get? Over American objections, Afghan president Hamid Karzai last week released 65 Taliban warriors from Bagram prison, where they were being held on suspicion of killing American troops, murdering Afghan civilians, deploying roadside bombs, and otherwise perpetrating mayhem. When U.S. officials complained that these killers couldreturn to the fight — as have other Taliban thugs, once freed — Karzai exploded: “If the Afghan judicial authorities decide to release a prisoner, it is of no concern to the U.S. I hope that the U.S. will stop harassing Afghanistan’s procedures and judicial authority, and I hope the U.S. will now begin to respect Afghan sovereignty.”

For these and many other reasons, Democrats are fleeing Obama. “I don’t care to have him campaign for me,” said Senator Mark Begich (D., Alaska).

A reelection ad for Representative Joe Garcia (D., Fla.) boasts that “he voted to let you keep your existing health plan, and he took the White House to task for the disastrous healthcare website.”

Rather than resist an increasingly weak — yet ever more assertive — Obama, GOP congressional leaders hand him whatever he wants. Thus, House speaker John Boehner and Senate GOP chief Mitch McConnell of Kentucky pushed through a $1.012 trillionbudget with, at best, minuscule and illusory spending cuts. A $956 billion farm bill includes $3 million to promote Christmas trees (who on Earth would buy them without federal assistance?), $100 million for maple-syrup market research, and $170 million for catfish protectionism. Boehner and McConnell sent Obama this gift-wrapped monstrosity, which was $56 billion higher than Obamacare’s original price tag. And in exchange, Obama gave them . . . zippo!

On February 12, Boehner and McConnell helped send Obama a measure to suspend the debt limit until March 15, 2015. (The debt ceiling was not raised from $17.2 trillion to a higher level; it simply was removed. The gas pedal remains in Obama’s Little Red Cor-debt, but the brakes are gone.) This passed the GOP House with Boehner and only 27 Republicans voting yes. The other 194 votes were from Democrats. When McConnell surrendered on cloture, 11 other Republican senators helped Democrats advance their dirty work. The debt ceiling is now a debt sunroof.

And what did Washington’s top two Republicans get for giving Obama 13 months to shop till America drops? Nothing! No repeal of Obamacare’s $47 billion bailout of health insurers. No approval of the Keystone XL Pipeline. No termination of the cure-killing medical-device tax. No votes on these matters, which would have forced Democrats to choose. This could have helped Republican candidates in November.

Steely resolve could stymie the unpopular and untrustworthy Obama. Sadly, Boehner, McConnell, and other GOP leaders are as firm as foil.

“Republicans are giving up because they know that winning is impossible when their leaders are determined to lose,” the Senate Conservatives Fund stated. “These leaders have telegraphed weakness to the Democrats and sabotaged conservative efforts so many times that Republicans now have no leverage.” The group concluded: “John Boehner must be replaced as Speaker of the House. . . . Unless we install a new leader who will actually go on offense, Democrats will never fear us and we will never have any leverage.”

Also, Earth’s sole superpower is sagging where it should be No. 1. America has slouched to No. 12 on the 2014 Heritage Foundation/Wall Street Journal Index of Economic Freedom.

“Now considered only a ‘mostly free’ economy, the U.S. has earned the dubious distinction of having recorded one of the longest sustained declines in economic freedom, second only to Argentina, of any country in the [20-year] history of the Index,” the reportstates. “The U.S. is the only country to have recorded a loss of economic freedom each of the past seven years.”

Regarding graft, America has stayed stable in Transparency International’s Corruption Perceptions Index. Unfortunately, and as recently as 2013, the U.S. has remained Earth’s 19th most honest country.

Thanks, in part, to Team Obama’s surveillance of journalists from Fox News Channel and the Associated Press, America tumbled 13 spots down Reporters Without Borders’ 2014 World Press Freedom Index. The U.S. dropped this year from No. 33 to No. 46. Hence, 45 nations now have freer journalists than does America. RWB calls America “satisfactory” rather than the top-rated “good.” As the report states: “Amid an all-out hunt for leaks and sources, 2013 will also be the year of the Associated Press scandal, which came to light when the Department of Justice acknowledged that it had seized the news agency’s phone records.”

America is a total mess

The Land of the Free is governed by an out-of-control egomaniac, neither bolstered by managerial competence nor hindered by the legislature’s institutional prerogatives. In the Home of the Brave, half of Congress cheers Obama’s unconstitutional behavior, while the other half grumbles and then meekly carpet-bombs his path with white flags.

The American people have been betrayed — both by Obama and the Democrats, whose lust for control intensifies daily, and by Republican leaders in Washington, whose cowardice and defeatism have turned their guts and spines into tapioca.

America, as Paul Simon sings, is slip-slidin’ away. And the worst part hasn’t happened yet. source – NRO