The 37 citizens killed during  beheading bloodbath had all been convicted of terrorism offences in the hardline kingdom. It emerged one man had even been crucified. Saudi lawmakers insist the men were charged with "adopting terrorist extremist ideology, forming terrorist cells" and harming the "peace and security of society".Those executed had been involved in attacking a base killing a number of security officers, the Saudi Press Agency statement said. The slaughter of mainly minority Shiites is likely to stoke further regional and sectarian tensions between rivals Saudi Arabia and Iran.

Pay close attention to this article and read it very carefully, this is what life is truly like when you live in a country that is governed by Sharia Law. The Law of Mohammed is cruel and unforgiving, justice is not a factor, it is only about exercising raw power to dominate and oppress.

I am not against Muslims as people, they are free to come here to America and assimilate into our culture. I would love to see them all come to s saving knowledge of Jesus Christ as Saviour and avoid the fiery Hell that Mohammed has been burning in since June 8, 632 AD. But I am resolutely against the tyrannical religion of Islam and its diabolical Sharia Law.

Since 9/11, there have been over 34,911 Islamic terror attacks, in the month of March alone there were 132 Islamic terror attacks, resulting in 729 killed, 776 injured and taking place in 23 countries. Look closely at the man being crucified in the picture at the top of the article, that’s not Jesus Christ paying for your sins. That’s a petty criminal receiving “justice” from Sharia Law. Don’t forget that.

FROM THE UK SUN: Abdulkarim al-Hawaj, 21, was a schoolboy when he was detained and accused of being a “terrorist” for sending texts online about an anti-government demonstration.

He was a Shiite Muslim – which is a persecuted minority group in Sunni-dominated Saudi – living in the troubled Eastern province.

Abdulkarim was beaten and tortured with electricity while his hands were chained above his head when he “confessed” to his crimes, human rights charity Reprieve said.

According to Amnesty International, his trial was a farce because he was denied access to a proper defence lawyer and convicted on the forced confession. Aside from torture, the charity also claims that his captors threatened to kill his family if did not confess to the crimes.

This week, he had his head cut from his body in front of a baying, bloodthirsty crowd along with 36 other men in the medieval country.

Sentencing a person to death who is aged under 18 is banned under international law. Another victim, Mujtaba al-Sweikat, was a teenager who was set to start a new life in the US, studying at Western Michigan University, when he was arrested for attending an anti-government protest.

The then-17-year-old – who had enrolled in English language and finance – was badly beaten including on the soles of his feet before he “confessed” to crimes against the state. Human rights charities claim he was also tortured into confessing and convicted in a “sham trial.”

Why are so many left-wing progressives in America so silent about Islam’s totalitarian tendencies? 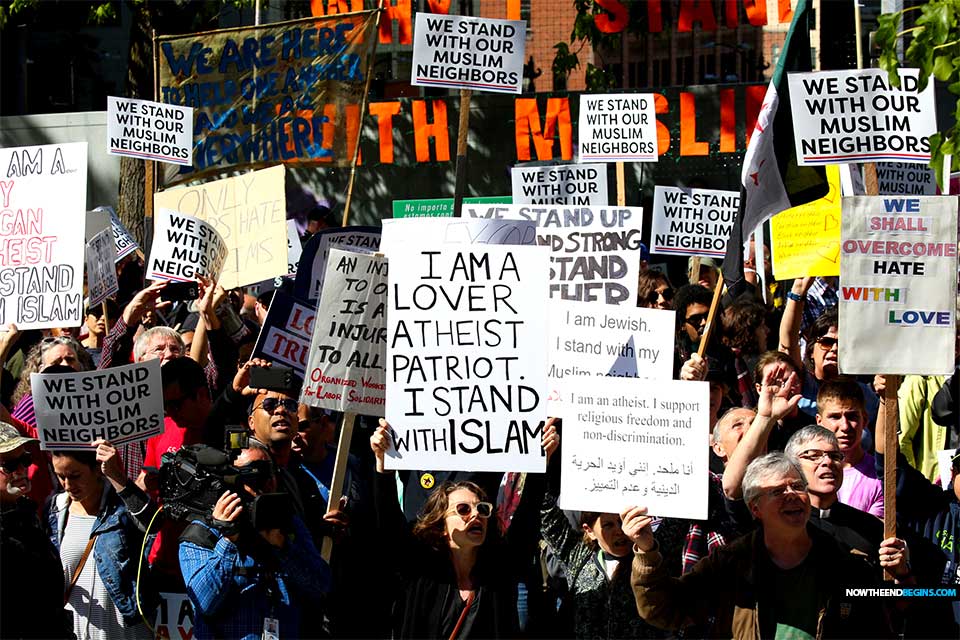 Despite his university protesting his sentence, insisting he had “great promise,” Mujtaba was also beheaded this week. Reprieve Deputy Director Harriet McCulloch insists both men were sharing information about “peaceful” demonstrations.

She said: “Many things can be used to justify a death sentence in Mohammed Bin Salman’s Saudi Arabia, including ‘disobedience against the King’, ‘preparing banners with anti-state slogans’ and ‘incitement via social media’.

“Mujtaba al-Sweikat and Abdulkarim al-Hawaj were teenagers sharing information about peaceful protests on their mobile phones. Saudi Arabia’s western allies must act now, to prevent any more young people being killed for exercising their right to freedom of expression.”

Another man, Munir al-Adam, was just 23, when he was arrested at a government checkpoint in 2012. His feet were so badly beaten he was forced to crawl on his hands and knees for days, it has been reported.

Munir lost the hearing in one of his ears, following a childhood accident, but was left completely deaf after the horrific torture, it has been alleged. He told a judge that he agreed to sign the confession because he was exhausted by the brutal and relentless torture.

The killings were carried out in Riyadh, the Muslim holy cities of Mecca and Medina, central Qassim province and Eastern Province, home to the country’s Shiite minority. Lynn Maalouf, Middle East Research Director at Amnesty International, said the mass execution was a chilling demonstration of the Saudi Arabian authorities callous disregard for human life.

She said: “It is also yet another gruesome indication of how the death penalty is being used as a political tool to crush dissent from within the country’s Shiite minority.”

For Abdulkareem al-Hawaj’s family, perhaps it was consolation their son’s decapitated head and body was not impaled and put on display as a warning to others. Others were not so fortunate.

The 37 citizens killed during  beheading bloodbath had all been convicted of terrorism offences in the hardline kingdom. It emerged one man had even been crucified. Saudi lawmakers insist the men were charged with “adopting terrorist extremist ideology, forming terrorist cells” and harming the “peace and security of society”.

Those executed had been involved in attacking a base killing a number of security officers, the Saudi Press Agency statement said. The slaughter of mainly minority Shiites is likely to stoke further regional and sectarian tensions between rivals Saudi Arabia and Iran.

Saudi dissident Ali Al-Ahmed, who runs the Gulf Institute in Washington, identified 34 of those executed as Shiites based on the names announced by the Interior Ministry.

“This is the largest mass execution of Shiites in the kingdom’s history,” he said.

In fact it marked the largest number of executions in a single day in Saudi Arabia since January 2, 2016, when the kingdom executed 47 people for terrorism-related crimes. The Interior Ministry’s statement said those executed had adopted extremist ideologies and formed terrorist cells with the aim of spreading chaos and provoking sectarian strife.

It said the individuals had been found guilty according to the law and ordered executed by the Specialised Criminal Court in Riyadh, which handles terrorism trials, and the country’s high court.

Amnesty International said 11 of the men were convicted of spying for Iran and sentenced to death after a “grossly unfair trial.” At least 14 others executed were convicted of violent offences related to their participation in anti-government demonstrations in Shiite-populated areas of Saudi Arabia between 2011 and 2012.

The Interior Ministry said the body of one of the executed men Khaled bin Abdel Karim al-Tuwaijri was publicly pinned to a pole. The statement did not say in which city of Saudi Arabia the public display took place. READ MORE

Human rights groups have been outraged over Saudi Arabia’s execution of 37 men this week. Most of these men were of the Shia minority and were punished on terror, violence and unrest-related charges. However, their actual crimes consisted of “disrespecting authority”. Gulf Affairs Institute Director Ali Al Ahmed joins In Question to discuss the outcry with RT America’s Manila Chan.