Occupy Movement Says ‘Violence Will Be Necessary to Achieve Our Goals’

Long live revolution! Long live socialism! After dismissing nonviolence as a dead end, he admits that for the Occupiers to achieve their goals, violence and bloodshed will be necessary: ... 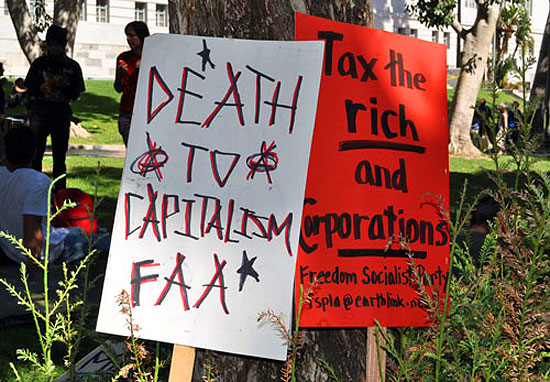 Citizen journalist Ringo captured this speaker at the Occupy Los Angeles camp a few days ago letting the cat out of the bag: After dismissing nonviolence as a dead end, he admits that for the Occupiers to achieve their goals, violence and bloodshed will be necessary:

Occupy L.A. Speaker: “One of the speakers said the solution is nonviolent movement. No, my friend. I’ll give you two examples: French Revolution, and Indian so-called Revolution.

Gandhi, Gandhi today is, with respect to all of you, Gandhi today is a tumor that the ruling class is using constantly to mislead us. French Revolution made fundamental transformation. But it was bloody.

India, the result of Gandhi, is 600 million people living in maximum poverty.

So, ultimately, the bourgeoisie won’t go without violent means. Revolution! Yes, revolution that is led by the working class.

Incredibly, he praises the massacres of the French Revolution’s Reign of Terror rather than Gandhi’s nonviolent philosophy.

And the crowd laps it up.

Every single day, more videos emerge from the Occupy movement showing people saying things that, if they had been said by a Tea Partier, would have been front-page news for weeks and discredited the movement forever. But since it’s the Occupy Wall Street movement, darlings of the media and Democratic politicians, they get a pass. source – PJM