For all her populist rhetoric against hedge-funders and the like, Clinton has received more donations from Wall Street CEOs than any candidate in the GOP — you know, the... 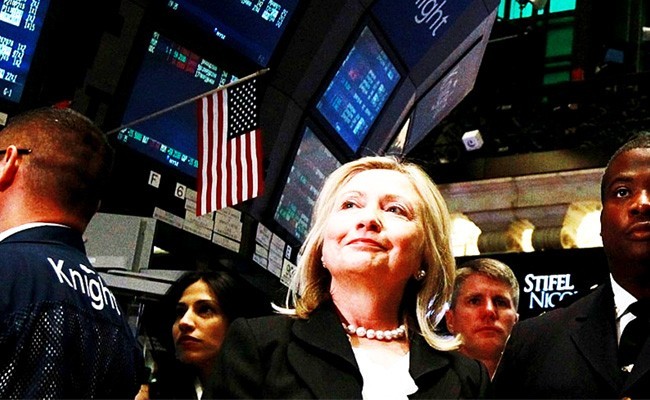 Fire-breathing scourge of Wall Street on the campaign trail — and reliable friend of Wall Street in the boardroom. That’s Hillary Clinton — and the big-money crowd thinks it’s in on the game.

EDITOR’S NOTE: Why are all the mega-wealthy Wall Street power brokers and hedge fund managers donating more money to Hillary’s campaign than to any Republican who is running? Because the NWO has already decided who the next president is going to be. Your vote? Meaningless. The one thing that could change that? Donald Trump.

For all her populist rhetoric against hedge-funders and the like, Clinton has received more donations from Wall Street CEOs than any candidate in the GOP — you know, the party of the greedy rich. More than 760 of Clinton’s presidential donors have listed their occupation as CEO or some variation, according to a Big Crunch analysis of federal election forms. That’s as many as have given to Republican hopefuls Jeb Bush, Marco Rubio and Ted Cruz combined.

And it doesn’t even include people like hedge-fund CEO Robert Mercer, who prefers to list himself as a “financial consultant” — or those who’ve given instead to pro-Hillary super-PACs. (Or all the folks who’ve bought goodwill over the years by giving to the Clinton Foundation.)

Surprising? No. We’re talking about a woman who’s made millions from hefty six-figure fees for speeches to, among others, groups headed by those same CEOs.

She’s also raked in many millions more for her campaign from corporate lawyers, lobbyists and bankers.

Still, that hasn’t stopped her from declaring, “Wall Street, you’ve had your president. Now we need a president for Main Street.”

And never mind what that seems to imply about the guy in the Oval Office now. Or that just one of her speeches costs four times the average American’s salary.

Wall Street gets it. The fat cats figure she’s just saying what she must to placate her party’s Sanders-Warren hard-left wing. As one hedge-fund manager told Politico: “Nobody takes it like she’s going after them personally.” It’s just Hillary being Hillary. Which is to say, all things to all people. source