Uprisings are taking place in several nations at once, and it could be the result of a very calculated move to bring a wave of extremist Islamic rule to... 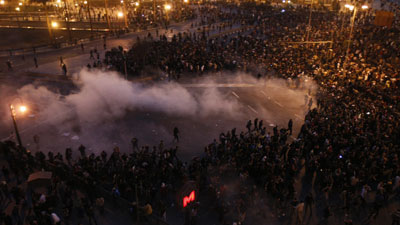 In Egypt, protests continued for a third consecutive day, with tens of thousands reportedly congregating in the nation's main cities.
by Geoffrey Grider January 27, 2011
NOW THE END BEGINS SHARE:

Who will rise to the top?

In the days of the Islamic Revolution in Iran, citizens were unhappy with their leadership and a popular uprising began which toppled the Shah. This created a power vacuum and paved the way for Ayatollah Khomeini and political Islam to step in and rule. Most Persians soon realized that the revolution had not created a better nation as they had so desperately hoped for, and we may see history repeating itself. Uprisings are taking place in several nations at once, and it could be the result of a very calculated move to bring a wave of extremist Islamic rule to Arab nations in the Middle East and Africa.

There is evidence in the current uprisings to show that Islamists such as Hezbollah and the Muslim Brotherhood are not only instigating riots, but that they are poised to move in and gain control once governments have been taken out. It’s not too hard to imagine that the people who believe they are protesting to lead their countries toward greater freedom and prosperity, are simply being used to bring about more fundamentalist Islamic regimes, and may very well end up worse off than before. Lebanon is already showing proof of this as the appointment of prime minister Najib Mikat is seen as a victory for the extremists of Hezbollah, Syria, and Iran.

“Islamists stand to gain the most from the so-called popular revolts targeting the regimes of Egypt, Yemen, and Tunisia, Israeli and Middle Eastern security officials warned today.

The news media largely has painted the revolts in Yemen, Tunisia and Egypt as popular unrest, citing the use of social media platforms like Facebook and Twitter to make the arrangements for the demonstrations.

But the Israeli and Arab governments fear the protests are being used by Islamists who seek power.

In Egypt, protests continued for a third consecutive day, with tens of thousands reportedly congregating in the nation's main cities.

Israeli security officials told WND the Islamists have been taking advantage of populous sentiment against the Arab regimes to work up the masses into revolt that can usher in Islamic rule.