"A man can have sexual pleasure from a child as young as a baby. However, he should not penetrate vaginally, but sodomising the child is acceptable. If a man does penetrate and damage the child then, he should be responsible for her subsistence all her life. This girl will not count as one of his four permanent wives and the man will not be eligible to marry the girl’s sister… It is better for a girl to marry at such a time when she would begin menstruation at her husband’s house, rather than her father’s home. Any father marrying his daughter so young will have a permanent place in heaven." Tahrirolvasyleh, fourth edition, Qom, Iran, 1990

The goal of the Muslim Brotherhood and all of its minions, is world domination. That is, to instate Sharia law in every country. We are seeing this in America right now. The Islamization of Dearborn is so blatant, that Americans tread lightly there, and some are in a constant state of fear. We are seeing it in Texas.

UPDATE MAY 20 2019: This article was written exactly 4 years ago today. So where do we stand on the subject of Liberals, Islam, pedophilia and Sharia Law? It’s worse than you might think. True, the Islam-loving Barack Hussein Obama is no longer president, Donald Trump is. But the wheels set in motion during Obama’s presidency remain largely in motion in 2019. In just a few short years, the Democratic Party has gone waaaay to the Left and become Socialist, and already elected two Muslim women to Congress who hate the Jews and hate Israel. The LGBTQ+ is more aggressive than ever, and with each passing day grow closer to adding the ‘P’ for pedophile to their umbrella of protection. Sadly, we have moved closer to what we warned you about in this article, much closer.

Original article from 2015 follows here below:

I know that the greater percentage of readers of NTEB are Christian, and the content of that article was so disgusting – I told people to stop reading if they could not handle knowing what the Muslims do. It’s all from the Qu’ran. Muhammad literally wrote the book on perversion.

I wrote on the practice of Islamic female genital mutilation. I also wrote about grown men having sex or foreplay with girls younger than nine years old. Oh yes! Even the Ayatollah summed up the guidelines of how men are to derive sexual pleasure with young girls and boys according to their book:

“A man can have sexual pleasure from a child as young as a baby. However, he should not penetrate vaginally, but sodomising the child is acceptable. If a man does penetrate and damage the child then, he should be responsible for her subsistence all her life. This girl will not count as one of his four permanent wives and the man will not be eligible to marry the girl’s sister… It is better for a girl to marry at such a time when she would begin menstruation at her husband’s house, rather than her father’s home. Any father marrying his daughter so young will have a permanent place in heaven.” Tahrirolvasyleh, fourth edition, Qom, Iran, 1990 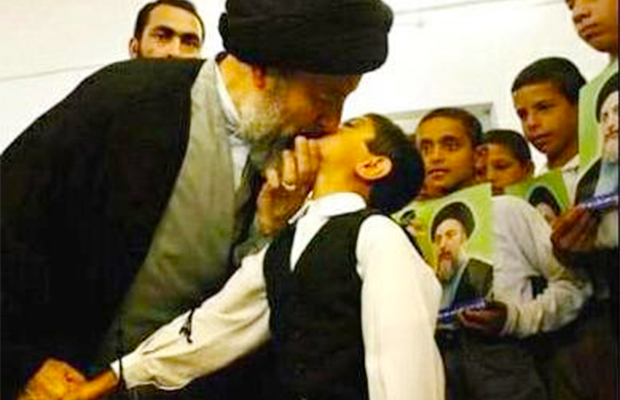 This is the real Islam that they try to keep secret.

After reading that, can you understand that men in Islamic culture, consider boys, girls and women to be “property” and not a person. And can you believe that the greatest cheerleaders of these perverts are the liberal press and our liberal politicians? Liberalism IS a mental disorder. I’m convinced of that.

Ok, now stay with me: The goal of the Muslim Brotherhood and all of its minions, is world domination. That is, to instate Sharia law in every country. We are seeing this in America right now. The Islamization of Dearborn, MI, AKA Dearbornistan, is so blatant, that Americans tread lightly there, and some are in a constant state of fear. We are seeing it in Texas. There are outcries by Americans, but the Islamists are bound and determined to see America with Sharia law in all 50 States.

But in order to achieve this lofty goal of Sharia Law, something MUST be done about those pesky pedophilia laws in every state. Enter NY Times.

“Hey remember when crazy right wingers predicted that gay marriage would lead to legalizing polygamy? Well that happened. Also they predicted that the next step would be to seek the same civil rights protections for pedophiles. And that’s happening in no less a forum than the New York Times which couldn’t find any terrorists to slot into its op-ed page and went with pedophilia instead.

How can you possibly make child rape sympathetic? Liberals always find a way.

Think back to your first childhood crush. Maybe it was a classmate or a friend next door. Most likely, through school and into adulthood, your affections continued to focus on others in your approximate age group. But imagine if they did not.

By some estimates, 1 percent of the male population continues, long after puberty, to find themselves attracted to prepubescent children. These people are living with pedophilia, a sexual attraction to prepubescents that often constitutes a mental illness.

This is so dishonest on so many levels that if boggles the mind. Pedophilia isn’t some sort of delayed development. Like rape, it’s about power. It’s not a mental illness. No more than homosexuality is. Framing it this way suggests that it’s something everyone grows out of.

But this is the liberal playbook.

2. Project its actions as uncontrollable due to persecution

3. Suggest that understanding evil will prevent it from committing more abuses

All three are present here.

A second misconception is that pedophilia is a choice. Recent research, while often limited to sex offenders — because of the stigma of pedophilia — suggests that the disorder may have neurological origins.

Well if it’s not a choice, then it’s not a crime. Men with pedophilia are three times more likely to be left-handed or ambidextrous, a finding that strongly suggests a neurological cause.

Gays are also more likely to be left-handed. But assuming that there’s a neurological cause confuses correlation with causation at best. Without legal protection, a pedophile cannot risk seeking treatment or disclosing his status to anyone for support. He could lose his job, and future job prospects We should make a sitcom to teach people to accept them.

There’s no question that the extension of civil rights protections to people with pedophilia must be weighed against the health and safety needs of others, especially kids. It stands to reason that a pedophile should not be hired as a grade-school teacher.

Oh, you kidders. Ten years from now they’ll have to hire them or be sued for discrimination. Twenty years later, Disney will punish employees who work in the boy scouts because they won’t let pedophiles become Scoutmasters.

We already saw this movie. We know how it ends.

The direct-threat analysis rejects the idea that employers can rely on generalizations; they must assess the specific case and rely on evidence, not presuppositions. Those who worry that employers would be compelled to hire dangerous pedophiles should look to H.I.V. case law, where for years courts were highly conservative, erring on the side of finding a direct threat, even into the late 1990s, when medical authorities were in agreement that people with H.I.V. could work safely in, for example, food services.

So we shouldn’t worry that courts will force schools to hire pedophiles as teachers because they forced cafeterias to hire workers with HIV?

The Americans With Disabilities Act of 1990 and Section 504 of the Rehabilitation Act of 1973 prohibit discrimination against otherwise qualified individuals with mental disabilities, in areas such as employment, education and medical care. Congress, however, explicitly excluded pedophilia from protection under these two crucial laws.

Okay I’m done. Will the last one still subscribing to the New York Times please use it to clean this up. Now the New York Times chose to run this, but censored McCain’s op-ed when he was running against Obama. That says it all. [1] – source

So you see, this is the newest liberal goal. They must make pedophilia a choice, not a crime! These knuckleheads are so pro Muslim/Sharia law/and Jihad, they are willing to allow these twisted, animalistic perverts, to hurt our children for the sake of their great cause. The liberals are completely duped into believing that the jihadist Muslims love them, because they speak for them.

What a surprise it will be, when the liberal press and politicians are thrown to their knees and hear the words “Submit or die!” All we can do at this point is get on OUR knees and pray to our Lord that He might give America one more chance.

Personally, I believe it’s too late.