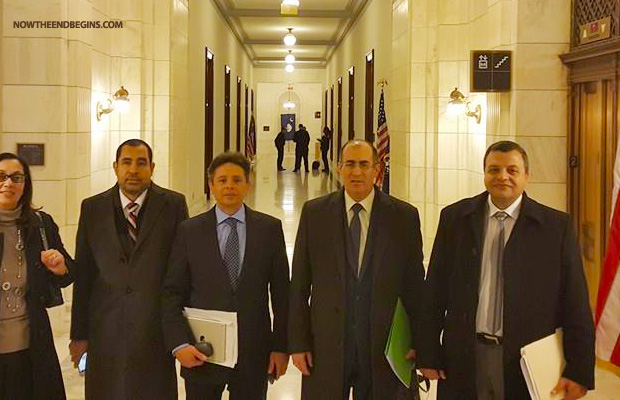 The State Department hosted a delegation of Muslim Brotherhood-aligned leaders this week for a meeting about their ongoing efforts to oppose the current government of President Abdel Fattah al-Sisi of Egypt, who rose to power following the overthrow of Mohamed Morsi, an ally of the Brotherhood, in 2013.

Representatives of the Muslim Brotherhood, seen here in the halls of Congress on January 27, 2015, are always welcome by the Obama Administration.

One member of the delegation, a Brotherhood-aligned judge in Egypt, posed for a picture while at Foggy Bottom in which he held up the Islamic group’s notorious four-finger Rabia symbol, according to his Facebook page.

That delegation member, Waleed Sharaby, is a secretary-general of the Egyptian Revolutionary Council and a spokesman for Judges for Egypt, a group reported to have close ties to the Brotherhood.

The delegation also includes Gamal Heshmat, a leading member of the Brotherhood, and Abdel Mawgoud al-Dardery, a Brotherhood member who served as a parliamentarian from Luxor.

Sharaby, the Brotherhood-aligned judge, flashed the Islamist group’s popular symbol in his picture at the State Department and wrote in a caption: “Now in the U.S. State Department. Your steadfastness impresses everyone,” according to an independent translation of the Arabic.

Read the rest of the story on Washington Free Beacon…