Egypt's highest administrative court dissolved Saturday the political party of the banned Muslim Brotherhood and ordered its assets liquidated, in the latest move against the 86-year old Islamist group.... 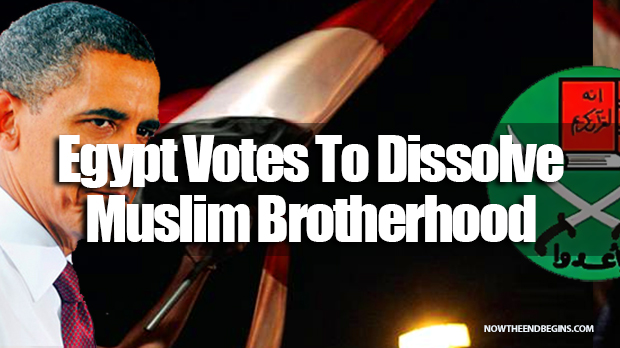 WILL THERE BE WEEPING IN WASHINGTON?
by Geoffrey Grider August 10, 2014
NOW THE END BEGINS SHARE:

Have you forgotten that Obama spent American millions to install them in Egypt?

Ahh, memories, where has the time gone? Barack Hussein Obama would like you very much to forget that he was the driving force behind the rapid rise to power of the Muslim Brotherhood in Egypt just a few years ago. And that he attempted to funnel billions in American taxpayer money to support them.  Yes, Obama would like to you very much forget all of his efforts to reshape Egypt under a Muslim Brotherhood-led coup that he financed.

WILL THERE BE WEEPING IN WASHINGTON?

The decision against the Freedom and Justice Party comes ahead of parliamentary elections expected this year and prevents the group from trying to rejoin politics a year after leading member, President Mohammed Morsi, was overthrown by the military.

The party was founded in 2011 by the Brotherhood, Egypt’s historic Islamist movement created in 1928, after President Hosni Mubarak was deposed in a popular uprising and it went on to dominate subsequent legislative elections.

The Middle East News Agency said the decision by the Supreme Administrative Court is final and can’t be appealed.

In a statement, the Freedom and Justice Party said the dissolution won’t succeed in uprooting the group’s ideals.

The court also said that by calling the military overthrow of Morsi a “coup” rather than a popular revolution, the party was breaking with national unity and worked to destabilize the country.

The court said the group’s assets are to be liquidated and handed over to the state, calling on the Cabinet to form a committee to oversee the process.

In 2011, after Mubarak’s ouster, the same court also dissolved the then ruling party, the National Democratic Party, which protesters had long accused of monopolizing power. Since then, many of its members have formed new political parties and earlier rulings barring its members from running have been overturned.

Many members of the Brotherhood and its Freedom and Justice Party are in jail or have fled Egypt to evade prosecution, part of the government crackdown against the Brotherhood that also included drying up its finances and freezing its public outreach programs.

The government declared the Brotherhood a terrorist group late last year, accusing it of orchestrating a wave of violence to destabilize the country after the military overthrew Morsi in July. Militant attacks against the police and military have surged since his ouster.