A second mystery barge has been discovered - this one docked in Maine, thousands of miles away from the ship spotted in San Francisco Bay that has set the... 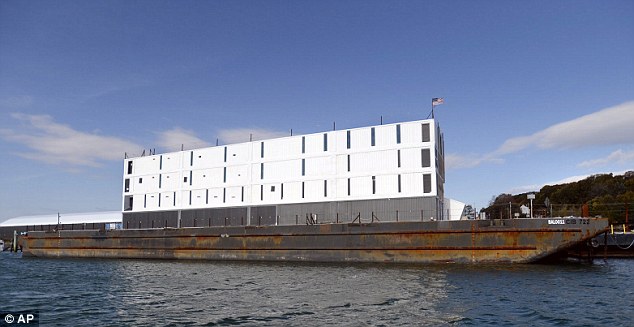 A second mystery barge has been discovered – this one docked in Maine, thousands of miles away from the ship spotted in San Francisco Bay that has set the tech world abuzz.

The vessel in Portland Harbor looks nearly identical to its cousin 2,700 miles away in California – four stories of shipping containers welded together atop a large flat barge. They are also both registered to the same mysterious Delaware-based corporation.

Mystery: This is the Maine barge that is thought to be part of a floating data center project by Google.

The ships are widely believed to be owned by Google – built as prototype floating data centers that use ocean water to regulate the intense heat put out by the mass of servers.

Google has refused to comment on the vessels, though a 2009 patent filed by the company describes an environmentally-friendly sea-powered telecommunications and storage system that looks much like the vessels that have appears on both side of the continent.

>>Click Here To Read The Rest Of This Story<<