Google-owned Motorola Mobility has filed for a patent, published last week, for a system "that comprises an electronic skin tattoo capable of being applied to a throat region of... 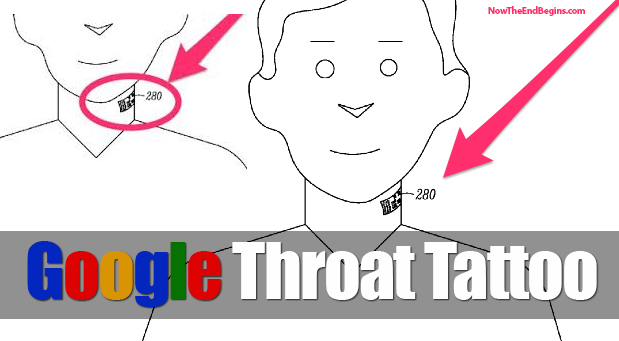 An NTEB ‘Must-Read’! – See The Companies That Are Spending Billions To Build The Mark Of The Beast (Amazing Videos)

High-tech companies we continue their upward momentum towards the merging of man and computer, a Mark of the Beast system where we will all be controlled by computer. Internally. Search engine giant, Google, is spending billions to help bring this about, and we present to you their latest offering in 666 culture – the RFID Throat Tattoo.

CNN— It looks like Google Glass was just the beginning. Google now appears to be aiming a few inches lower, working on a temporary electronic tattoo that would stick to the user’s throat.

If you really pay attention, Google is working on some scary, end times stuff.

Google-owned Motorola Mobility has filed for a patent, published last week, for a system “that comprises an electronic skin tattoo capable of being applied to a throat region of a body.”

The patent says the tattoo would communicate with smartphones, gaming devices, tablets and wearable tech like Google Glass via a Bluetooth-style

connection and would include a microphone and power source. The idea is that wearers could communicate with their devices via voice commands without having to wear an earpiece or the the Glass headset. And how’s this for future tech? It could even be used as a lie detector. source – WPTV