The "real-time facial recognition" software "can detect a face using the Google Glass camera, send it wirelessly to a server, compare it to millions of records, and in seconds... 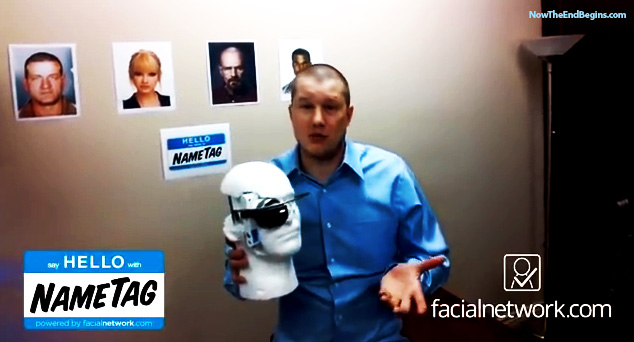 A new app will allow total strangers to ID you and pull up all your information, just by looking at you and scanning your face with their Google Glass. The app is called NameTag and it sounds CREEPY.

The “real-time facial recognition” software “can detect a face using the Google Glass camera, send it wirelessly to a server, compare it to millions of records, and in seconds return a match complete with a name, additional photos and social media profiles.”

The information listed could include your name, occupation, any social media profiles you have set up and whether or not you have a criminal record (“CRIMINAL HISTORY FOUND” pops up in bright red letters according to the demo).

And NameTag may have already added you to their database.

Two million entries have already been uploaded to FacialNetwork.com. Once the app officially goes live, you can sign up for NameTag and opt-out, instead of the alternative: Having to opt-in to allow them to show your information.

How is that OK?

“It’s not about invading anyone’s privacy,” one NameTag’s creators claimed (viaIndependent). “It’s about connecting people that want to be connected. We will even allow users to have one profile that is seen during business hours and another that is seen in social situations. NameTag can make the big, anonymous world we live in as friendly as a small town.”

It may not be about invading anyone’s privacy, but that sounds like what it does. And forcing people to opt-out if they want to maintain their privacy is wrong (we would go so far as to say it should be illegal). But the purported benefits of the app are almost even worse:

They continue, “It’s much easier to meet interesting new people when we can simply look at someone, see their Facebook, review their LinkedIn page or maybe even see their dating site profile. Often we were interacting with people blindly or not interacting at all. NameTag on Google Glass can change all that.” source – EOnline