Race baiting, like all con games and scams, can get pretty confusing when you tell too many stories and have too many irons in the fire. ... 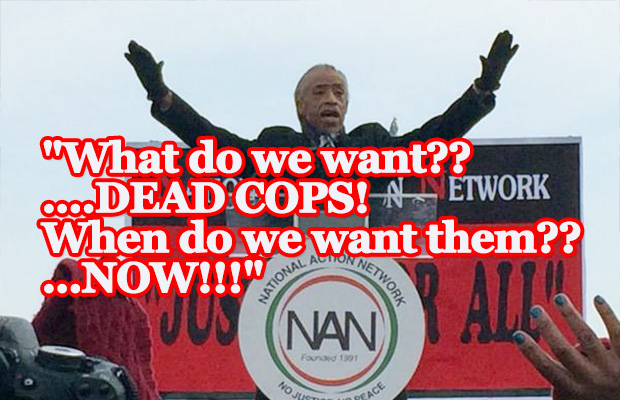 Race baiting, like all con games and scams, can get pretty confusing when you tell too many stories and have too many irons in the fire. Ever watch someone do the “shell game” on Broadway and 6th? After while, you really cannot recall which shell the pea is under. So it is with Al Sharpton’s current self-created, self-inflicted mess that he now finds himself in.

Al would also like you to forget that just two weeks ago, at his Million Marchers event in New York City, his followers chanted: “What do we want??….DEAD COPS! When do we want them??…NOW!!!”

Since the deaths of Michael Brown and Eric Garner, Al Sharpton and his team of race bating hate inciters have travelled across the mid-west and northeast hold rallies and protest marches against police violence. The video below shows the fruit of his last anti-cop rally held in NYC on December 13th:

He has, time and again, painted and portrayed local law enforcement – the cops – as the bullying bad guys who do nothing but kill people of color for the fun of it. Al would also like you to forget that just two weeks ago, at his Million Marchers event in New York City, his followers chanted:

Well, it would seem that the “Reverend” Al and his crew were granted their wish. 2 Brooklyn cops were executed as they sat in their patrol car last Saturday night by one of Sharpton’s more enthusiastic followers. Will others follow that example? Almost assuredly. He has also begun to receive death threats, to which he commented at a recent press conference:

“”The language is ‘Hey N word, stop killing innocent people, I’m going to get you,” and I have several like this,” he said. “We are now under intense threat from those that are misguided, by those that are trying to blame everyone from civil rights leaders to the mayor rather than deal with an ugly spirit that all of us need to fight.”

That “ugly spirit” he says we “need to fight” was created by him and all his race baiting buddies. The irony of it all is that now Sharpton is seeking protection from, not only local law enforcement, but from the FBI as well. The same people he makes a living off of by tearing them down and vilifying is now the very same people he seeks to be protected by.

In the meantime, attacks against local law enforcement will continue as long as people like Al Sharpton and Jesse Jackson fan the fires of racism and class division.