Ferguson Protesters Are Proud Of Looting And Terrorizing Local Shopkeepers

"This is not the time for no peace. We are jobless men, and this is our job now--getting justice," the Chicago militant told the Post. "If that means violence,... 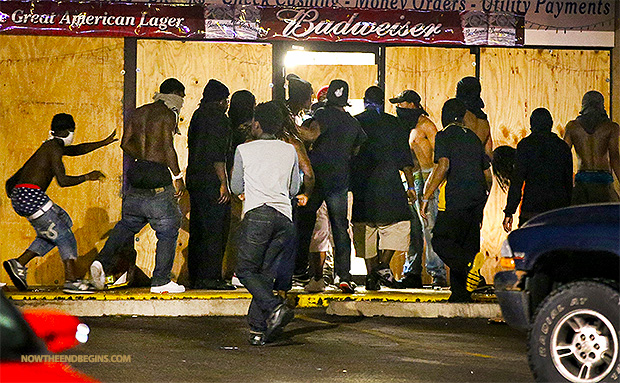 “It’s like looting tourism, they are spending their gas money to come down here and steal.”

Michael Brown was killed by a police officer, that much we are sure of. But the how’s and why’s of the unfolding of those events are only now beginning to become clear. The officer said it was self defense, as do over a dozen witnesses who came forth yesterday. Protesters said it was “police abuse” and that Brown was “killed in cold blood”. So what’s the truth?

“I’m proud of us. We deserve this, and this is what’s supposed to happen when there’s injustice in your community,” said DeAndre Smith, whom the Washington Post says was “fresh from looting the QuikTrip.”

Here in America, we have laws and we have the justice system to help us to discover those answers the best we are able to do so. It’s not a perfect system but it works much more often then it fails. And it is certainly a better legal system than whats found in nearly any other nation on earth. But the Ferguson protesters do not want justice, and they do not want peace. What they want is anarchy, mayhem and the opportunity to terrorize and steal from people who before the incident were their friends and neighbors.

The protesters wear masks just like ISIS and the KKK

They will not give their names. But their leaders say they are ready to fight, some with guns in their hands. “This is not the time for no peace,” said one man, a 27-year-old who made the trip here from Chicago. 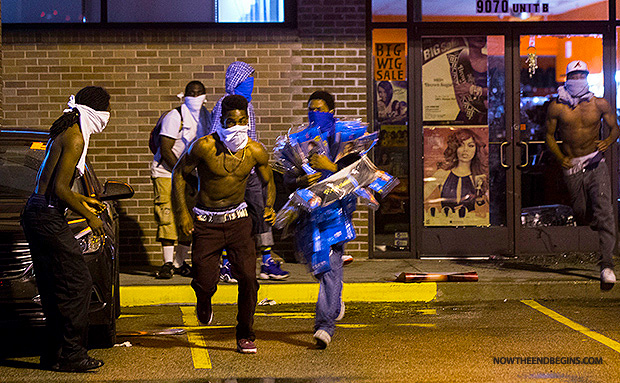 “This is not the time for no peace. We are jobless men, and this is our job now–getting justice,” the Chicago militant told the Post. “If that means violence, that’s okay by me. They’ve been doing this to us for years.”

He spoke after a small group of fellow militants held a meeting behind a looted store, sketching out ambitions for the days ahead. “We are jobless men, and this is our job now — getting justice,” he said. “If that means violence, that’s okay by me. They’ve been doing this to us for years.”

Police on the streets Monday night said some of those wearing red bandannas are members of the Bloods gang.

“People have been tweeting, ‘We are ready to die tonight,’ ” said Mary Pat Hector, a national youth organizer with the Rev. Al Sharpton’s national action network. “It is a trending topic.”

Hector traveled from Atlanta, hoping her presence as a non­violent protester would help counter what she described as “so much negative energy.”

Then there are the looters, leaderless men who under cover of nightly political protest target liquor stores, beauty-supply shops and other businesses with inventories easy to sell and in high demand.

Ferguson police officials would not quantify how many looters have been arrested since the Brown shooting but presented a Washington Post reporter with a stack of roughly 50 arrest reports. While some of those arrested for stealing are from Ferguson, a large number have addresses listed in Illinois or in Texas.

“It’s like looting tourism,” an officer commented as he showed the reports. He asked not to be named. “It’s like they are spending their gas money to come down here and steal.”