“So the jury is still out on where we go with Amy,” Al Sharpton said. “We clearly are willing to deal with an immediate formula to see where we... 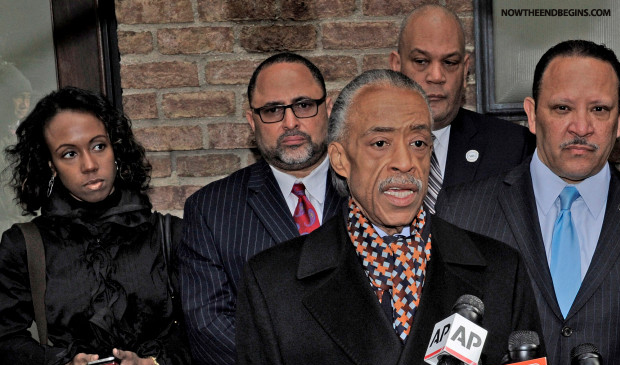 STOKING THE FIRES OF RACIAL HATE IS A FULL TIME BUSINESS FOR BIG AL
by Geoffrey Grider December 20, 2014
NOW THE END BEGINS SHARE:

Flashback: Al Sharpton Says, “If Jews Want To Get It On, Tell Them To Pin Their Yarmulkes Back And Come Over To My House,” Led Marchers Chanting “Kill The Jews”…

Sony Pictures head Amy Pascal met privately with the “Reverend” Al Sharpton to discuss the racially charged emails that the North Korea hack had brought to light. Pascal, desperate to keep her job, has agreed to allow Sharpton to have a say in how future movies are produced at Sony. Huh??

Somehow, in this increasingly bizarro world in which we live, Al Sharpton has risen to power as the arbiter for what constitutes decency and morality these days. Racism is our biggest problem, he says, and he alone has the wisdom and insight to fix it.

In his beneficence, Al is graciously allowing Pascal to keep her job as Sony CEO with this remark:

“So the jury is still out on where we go with Amy,” Sharpton said. “We clearly are willing to deal with an immediate formula to see where we deal with breaking down the walls of inflexible and so far immovable racial exclusion in Hollywood.”

Al Sharpton, like Jesse Jackson and all the others, are nothing more than race baiting extortioners who will hold hostage anyone and everyone who has ever made a racist remark. The very idea that a low-life bottom feeder like Sharpton could ever wield the type of clout contained in his remark “the jury is still out on where we go with Amy” shows you how badly broken and dysfunctional we as a nation truly are. Is this the same Al Sharpton that chanted “Kill The Jews” in the 1991 race riots he created in Crown Heights, NY? Yes, I believe it is.

What the “Reverend” Al would like you to forget are things like the Tawana Brawley rape hoax, the Crown Heights killing he caused by inflaming racial hate, his anti-semitic comments, and so many other despicable events he has engineered. Read about it all here.

Up next, reparations for slavery from the time of the Civil War. It will most like be in the form of one of Obama’s illegal executive orders. Coming soon to a theater of the absurd near you.