Ismaaiyl Brinsley listened when New York Mayor Bill De Blasio, Al Sharpton and Barack Obama stoked the fires of division and hate against the police not just in New... 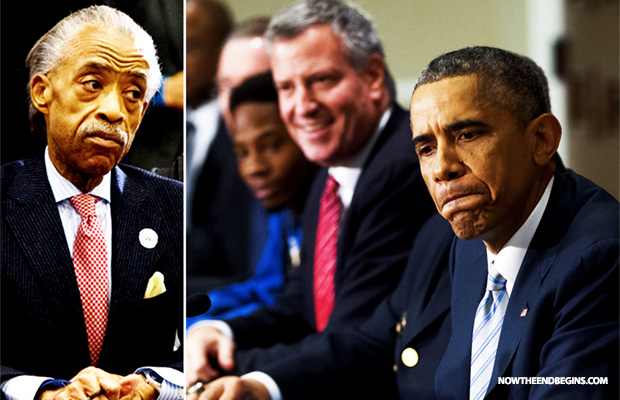 Today, the “free pass” of the Liberal Race Card expired

“Let every soul be subject unto the higher powers. For there is no power but of God: the powers that be are ordained of God. Whosoever therefore resisteth the power, resisteth the ordinance of God: and they that resist shall receive to themselves damnation. For rulers are not a terror to good works, but to the evil. Wilt thou then not be afraid of the power? do that which is good, and thou shalt have praise of the same: For he is the minister of God to thee for good. But if thou do that which is evil, be afraid; for he beareth not the sword in vain: for he is the minister of God, a revenger to execute wrath upon him that doeth evil.” Romans 13:1-4

The liberals love to play the race card, they love to stoke the fires of hatred and division. It’s their main stock-in-trade, it’s how they control their followers and how they fill up their bank accounts. Puppets like Al Sharpton are trotted out at the first whisper of a suspected racially-motivated incident, and immediately they begin the chanting and fist waving designed to whip the frenzied gathered crowds into submission to the party line.

Then the key players like De Blasio and Obama add more race-dividing statements combined with the full weight of their respective offices to seal the deal. It’s a team effort that, up until today, was a flawlessly-working machine of hate dispensing, deal making and money making. It worked right up to the moment two Brooklyn police officers were assassinated – gangland-style – by one of the people that their hateful rhetoric inspired.

THE PEOPLE HAVE SPOKEN, IS ANYONE LISTENING?

Ismaaiyl Brinsley listened when New York Mayor Bill De Blasio, Al Sharpton and Barack Obama stoked the fires of division and hate against the police, not just in New York and Ferguson but all across the nation. Then he went out and acted on the hate he absorbed from them.

“The mayor’s hands are literally dripping with our blood because of his words, actions and policies and we have, for the first time in a number of years, become a “wartime” police department. We will act accordingly,” the statement, posted on the PBA’s Facebook page, read.

However, a spokesman for the Patrolmen’s Benevolent Association has denied that the group issued the memo. The statement, which reads as a directive to officers, says, “At least two units are to respond to EVERY call” and “Absolutely NO enforcement action in the form of arrests and or summonses is to be taken unless absolutely necessary.”

Police officers turned their backs on New York Mayor De Blasio at press conference on the execution of two cops as he is accused of having ‘blood on his hands’ over anti-police sentiments.

Today, two cops lives were extinguished and a corner was turned. There can be no going back. The people are calling, and rightfully so, for Al Sharpton, Bill De Blasio and Barack Obama to be held responsible for their hateful, racially-dividing speech and conduct. Today, the “free pass” of the Liberal Race Card expired. #CopsLivesMatter

There can no going back.