PROGNOSIS NEGATIVE: Obamacare is nothing more or less than the sledgehammer of Socialism Obama is wielding to finish off America. The patient will not recover.... 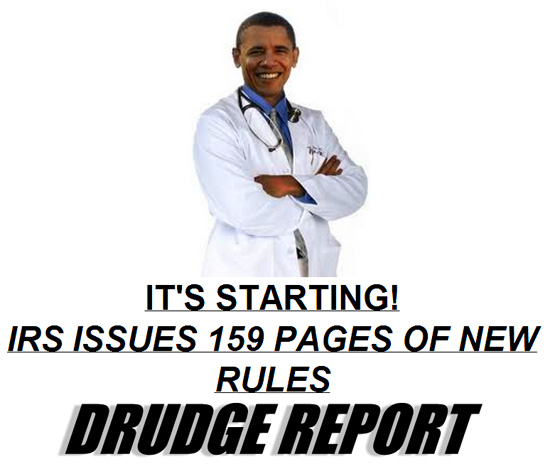 PROGNOSIS NEGATIVE: Obamacare is nothing more or less than the sledgehammer Obama is wielding to finish the onslaught of Socialism on America. The patient will not recover.
by Geoffrey Grider December 4, 2012
NOW THE END BEGINS SHARE:

Behold the Sledgehammer of Socialism

Reuters – The Internal Revenue Service has released new rules for investment income taxes on capital gains and dividends earned by high-income individuals that passed Congress as part of the 2010 healthcare reform law.

PROGNOSIS NEGATIVE: Obamacare is nothing more or less than the sledgehammer Obama is wielding to finish the onslaught of Socialism on America. The patient will not recover.

The 3.8 percent surtax on investment income, meant to help pay for healthcare, goes into effect in 2013. It is the first surtax to be applied to capital gains and dividend income. The tax affects only individuals with more than $200,000 in modified adjusted gross income (MAGI), and married couples filing jointly with more than $250,000 of MAGI.

The tax applies to a broad range of investment securities ranging from stocks and bonds to commodity securities and specialized derivatives.

The 159 pages of rules spell out when the tax applies to trusts and annuities, as well as to individual securities traders.

Released late on Friday, the new regulations include a 0.9 percent healthcare tax on wages for high-income individuals.

Both sets of rules will be published on Wednesday in the Federal Register.

The proposed rules are effective starting January 1. Before making the rules final, the IRS will take public comments and hold hearings in April.

Together, the two taxes are estimated to raise $317.7 billion over 10 years, according to a Joint Committee on Taxation analysis released in June.

To illustrate when the tax applies, the IRS offered an example of a taxpayer filing as a single individual who makes $180,000 in wage income plus $90,000 from investment income. The individual’s modified adjusted gross income is $270,000.

The 3.8 percent tax applies to the $70,000, and the individual would pay $2,660 in surtaxes, the IRS said. The IRS plans to release a new form for taxpayers to fill out for this tax when filing 2013 returns.