Thousands of supporters of President Hosni Mubarak today attacked anti-government protesters as fresh turmoil gripped Egypt. Backers of the president, who last night agreed to relinquish his grip on... 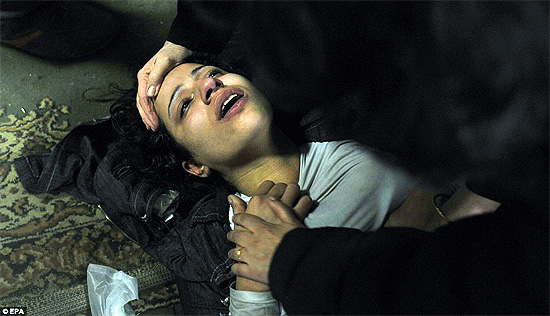 The carnage is terrible as the death toll rises in Egypt

Thousands of supporters of President Hosni Mubarak today attacked anti-government protesters as fresh turmoil gripped Egypt. Backers of the president, who last night agreed to relinquish his grip on power, fought with the crowds in Cairo’s Tahrir (Liberation) Square, at least 500 injured. Some rode into the ranks on horses and camels and wielding whips. In chaotic scenes, they pelted each other with stones, large sticks and machetes. The death toll since protests began is now believed to have hit 300. 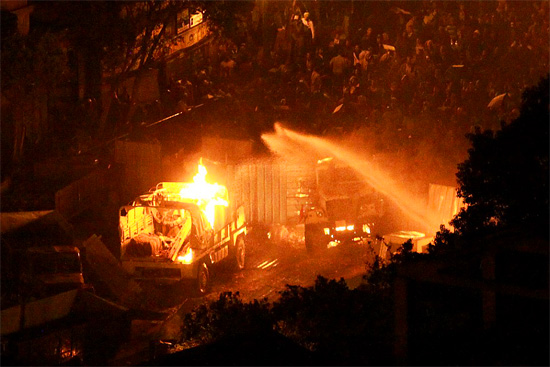 Cairo in flames: The army finally used water cannon to clear protesters tonight as military vehicles burned in the streets

Many of those who demonstrated in support of the regime are believed to be secret police in plain clothes. There were reports that concrete blocks has been hurled on pro-democracy protesters. The army has stood by and refused to intervene so far. But there are growing fears that there will be a massacre. Opposition leader Mohamed ElBarawi said that Mr Mubarak was using ‘scare tactics’ to stay in power.

Injured: An Egyptian woman is treated at a makeshift medical facility in the vicinity of the square

The morning – the eighth day of protest – began peacefully enough with a fresh round of protests in Tahrir Square. But for the first time thousands of Mr Mubarak’s supporters descended on the massive public space, the scene of a yesterday’s 250,000 strong demonstration. Around 3,000 supporters of the 82-year-old leader were seen breaking through a human chain of anti-government protesters as they tried to defend the thousands gathered in the Square. Chaos erupted as they tore down banners denouncing the president and fistfights broke out as they advanced across the plaza. 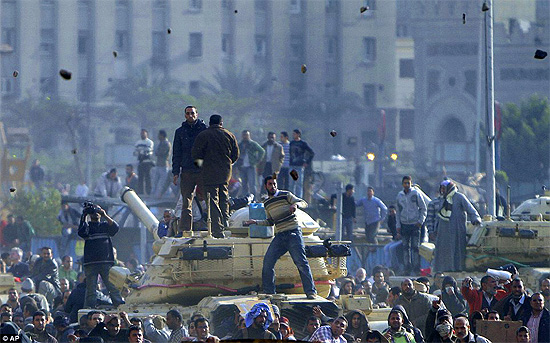 Egypt’s band of opposition parties, including the banned Muslim Brotherhood, have begun to coalesce around the figure of Mohamed El Baradei, a Nobel Peace laureate for his work as head of the UN nuclear agency. Yesterday in Cairo, effigies of Mr Mubarak were hung from lamp-posts, as people screamed for him to quit, likening him to Hitler and a donkey. Khaled Osman, 40, a tourist guide from Aswan, said: ‘I am so happy that the old man has finally given up. But he must go now. And we will stay here campaigning until he goes.

‘The game is over, he knows that.’