On Monday, Hassan published an infographic with steps to take to “free your loved ones” from Trump’s “cult.” Last week, Washington Post columnist and MSNBC contributor Eugene Robinson referred to Trump’s supporters as “members of a cult” that need to be “reprogrammed.” “There are millions of Americans, almost all white, almost all Republicans, who somehow need to be deprogrammed,” Robinson stated. “It’s as if they are members of a cult, the Trumpist cult, and they have to be deprogrammed.” Welcome to 1984, thought crime and the New World Order.

On Monday, the Washington Post published an op-ed by columnist Brian Klaas whereby he expresses the near futility of attempting to “deprogram” millions of Trump supporters, claiming that many have “gone far enough down the rabbit hole of conspiratorial thinking.”

In the Chick gospel tract entitled ‘The Last Generation’ we see a New World Order where ‘wrong thinking’ is now a crime, and that citizens are required to inform the government on the ‘suspicious activities’ of their friends, neighbors and family members. In one especially prescient scene we see a grandson informing the authorities on his grandfather who is a believer in Jesus Christ, who is then taken away for ‘reprogramming’. Welcome to the Democrat Party 2021.

“But when they shall lead you, and deliver you up, take no thought beforehand what ye shall speak, neither do ye premeditate: but whatsoever shall be given you in that hour, that speak ye: for it is not ye that speak, but the Holy Ghost. Now the brother shall betray the brother to death, and the father the son; and children shall rise up against their parents, and shall cause them to be put to death. And ye shall be hated of all men for my name’s sake: but he that shall endure unto the end, the same shall be saved.” Mark 13:11-13 (KJB)

Talking about the time of the great Tribulation after the rapture of the Church, Jesus warns that those Tribulation saints must ‘endure to the end’ in order to make it through to Heaven. They will have to refuse the Mark of the Beast, and have nothing to do with the name, number and image of the Antichrist, but if they do, they will be beheaded for their refusal to ‘play ball’. Rightly dividing the scripture shows us clearly that we in the Church Age will not be here for all that, but, what we are seeing coming together right now is a nice, little ‘preview’ of what’s coming after we leave.

We constantly speak out against the lies of QAnon, but the New World Order is not trying to eradicate QAnon, they are trying to get rid of the King James Bible and all those people who believe it. Jesus Christ is their target, but since they can’t get Him, they will settle for the next best thing, His followers. Dark days are not only ahead, they are here.

FROM BREITBART NEWS: The essay, titled “‘Why is it so hard to deprogram Trumpian conspiracy theorists?” depicts millions of Trump supporters as so devoted to “dangerous lunacy” that nearly all hope is lost of bringing them “back to reality.”

Referring to President Trump as “a conspiracy theorist in chief” who “injected the toxin of baseless conspiratorial thinking straight into America’s political bloodstream,” the essay claims that while only hundreds stormed the Capitol, “there are millions of Americans who share their views.”

“So, do we have any hope of deprogramming the millions of Americans who are devoted to dangerous lunacy?” asks Klaas. “Don’t hold your breath,” he declares.

The essay then claims that the findings of psychologists and political scientists indicate that “it can be nearly impossible” to recover people deeply involved in conspiratorial thinking. Another factor that makes the attempt to “deprogram” more difficult, the essay explains, is the social aspect.

“Modern conspiracy movements such as QAnon, are thriving in church groups and yoga classes,” Klaas states. “They’re social. And that means that deprogramming is that much harder. Today, with the rise of social media, one can be alone but feel part of a group — and some of those groups are glued together by unhinged beliefs,” Klaas adds. 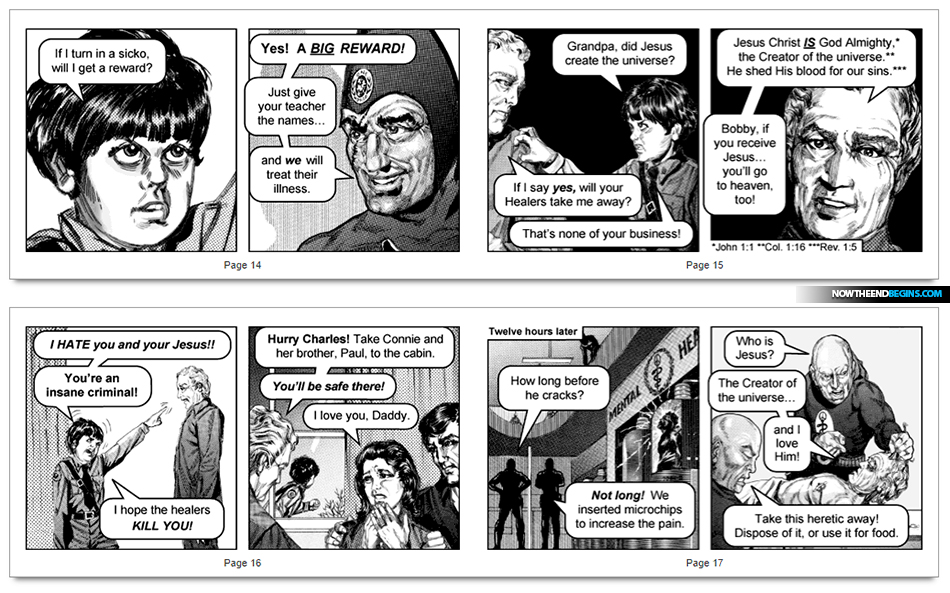 Big Brother’s nightmarish world order is just around the corner. Christ is coming soon for believers. Will you be left behind?

The essay then describes “deluded” Trump supporters as less conspicuous than expected, deeming the attempt to ”accurately diagnose” those who have “taken the poison” more difficult.

“Bringing the deluded people who populate Trump’s political base back to reality will be difficult,” Klaas writes.  “But to find the right antidote, we need to at least accurately diagnose who has taken the poison,” he adds.” And that means acknowledging that those who sympathize with the Capitol insurrectionists are not far-off lunatics. Some, most likely, are your neighbors.”

However, despite any success in “diagnosing” which citizens have “taken the poison,” the essay expresses little hope of change.

“We need to have a coalition of reality in our politics and Republican leaders need to be held accountable for not inhabiting that real space that we all should live in,” he added.

Texas Teen Turns Own Father In To Authorities

A Texas teenager who alerted federal authorities about his father’s alleged role in the Jan. 6 siege on the U.S. Capitol says he wants others to know that “it’s okay to come forward.” https://t.co/bS1u29tBnq

The notion of “deprogramming” Trump supporters has been fiercely promoted by those on the left in recent days following the November presidential elections and the storming of the U.S. Capitol this month.

In a recent video promoted by the left, citizens are called upon to become cyber detectives to monitor and report fellow citizen Trump-supporters to authorities.

The threat addressed is described as emanating from “radical” conservatives who live among us. The clip states:

They are your children’s teachers. They work at supermarkets, malls, doctor’s offices, and many are police officers and soldiers.

The video has received over four million views since.

On Thursday, Vanity Fair published an interview with cult expert Steven Hassan detailing how to go about “deprogramming” Trump supporters, while arguing for a “massive education” effort involving the participation of schools, mental health professionals, law enforcement, media, politicians, and intelligence agencies. Last week, Hassan appeared on CNN and stated that “all of America needs deprogramming” due to the negative influence of President Trump.

On Monday, Hassan published an infographic with steps to take to “free your loved ones” from Trump’s “cult.” Last week, Washington Post columnist and MSNBC contributor Eugene Robinson referred to Trump’s supporters as “members of a cult” that need to be “reprogrammed.” READ MORE