An air of crisis descended on the world Tuesday, Aug. 9 as markets continued to tumble steeply and in London, large parts of the city succumbed to uncontrolled violence... 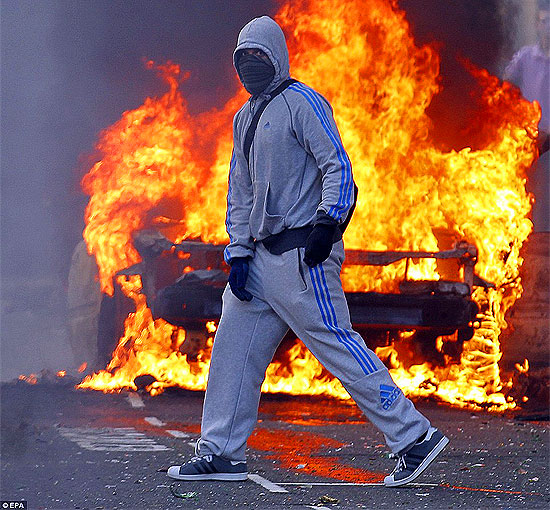 Anarchy broke out in UK last night as hooded youths set fire to cars, bins and buildings as police battled to bring them under control
by Geoffrey Grider August 9, 2011
NOW THE END BEGINS SHARE:

An air of crisis descended on the world Tuesday, Aug. 9 as markets continued to tumble steeply and in London, large parts of the city succumbed to uncontrolled violence joined by three major British cities. Far East stocks leveled out at 3 percent, Europe fell 3.5-5 percent Tuesday after Wall Street slid 5-7 percent Monday. More than $70 billion were wiped out in global trading Monday hours after US President Barack Obama said America will always be a Triple A country no matter what some agency may say.

Anarchy broke out in UK last night as hooded youths set fire to cars, bins and buildings as police battled to bring them under control

The Bank of America took the worst punishment with a 23 percent decline in its stock. Investors did not miss the warning by a Standard & Poor executive that the US credit rating may be lowered again after its landmark downgrade from AAA to AA+.

Heads of the European Union and national leaders, with no solutions for the debt crises plaguing two major members Italy and Spain, are in a panic over the threat to the Eurozone and euro currency. Their fears are driving droves of investors across the world out of the markets in the hope of safe landings in gold (which shot up to $1.721 the ounce), the Japanese yen and the Swiss franc.
Some government spokesmen and pundits are blaming speculators for the crash, praising investors who take the long view and hold tight. Others lay the blame squarely at the door of various governments for mishandling the 2008 economic crisis and its social fallout – witness the consequences of tight austerity measures in Greece and now the United Kingdom.
Thanks to deft footwork by its economic managers, Israel has so far escaped the worst of the backlash, but may not remain unscathed for much longer. Three alarm bells rang this week:
1. Standard & Poor applied its downgrade of America’s credit rating to Israel’s $6billion worth of US-backed bonds, lowing their rating from AAA to AA+.
2. The big demonstrations protesting soaring prices for housing and other essentials and demanding economic reforms to bridge the social gap – are now in their third week. Prime Minister Binyamin Netanyahu is skating on thin ice between expenditure for satisfying their demands and defusing a movement jeopardizing his government and keeping the economy on an even, stable keel.
Meeting even some of those demands could quickly tip Israel over into the abyss of economically-distressed countries, with attendant mass unemployment and a declining currency.
3.  Even in the unlikely event of the government keeping the national purse sealed against social demands, Israel is short of the reserves for weathering the fallout to its economic and export industries from the crises in the US and Europe.
Britain is now facing the sharpest edge of this dilemma with far less options.

The street violence, looting, burning, attacks on police – which erupted in the North London borough of Tottenham Saturday, Aug. 6, when a protest against the shooting by police of a local man got out of hand – has spread since with lightning speed into one London borough after another and, Monday night, to three major cities, Liverpool, Birmingham and Bristol.
Inadequate police and fire services are helpless to halt the looting and torching rampages of hooded teenagers in ethnically mixed and disadvantaged communities – even after 450 arrests. Owners of businesses and homes are forced to watch their properties burn down with no police or firemen in sight. Petrol bombs and knives are out against the police. Tuesday morning, armored vehicles appeared on the streets of Ealing Broadway and Clapham Junction after every second shop was looted. Police drafted in from other places are untrained and unequal to the mob tactics of abruptly moving on to their next target which may be an upend neighborhood.

The crisis caught most of the heads of the UK government away on holiday. As the situation degenerated by the hour, Prime Minister David Cameron flew home Tuesday and called an emergency Cobra committee meeting that day. Official government and police statements until then that the violence “is unacceptable” “pure criminality” and “lawbreakers will face the consequences “have made matters worse.

British authorities are criticized widely for being too soft with the mobs of mostly teenagers. Cameron faces demands to bring in the army because the police are clearly unequal to the situation. He does not have the option of loosening up on the austerity measures which have reduced the average living standards by 25 percent and responding to real hardship in order to defuse the disturbances. The UK is in the verge of bankruptcy, financial institutions are in flight from the City of London, further deepening the crisis. Riots across the country will further deter investors.

Standard & Poor indicated Monday that some European countries may be headed for debt downgrades after the United States – with Britain in line. source – DEBKA