Parents had no idea that a mandatory assembly to promote gay pride was taking place. and many were justly outraged. It wasn't until the children came home with... 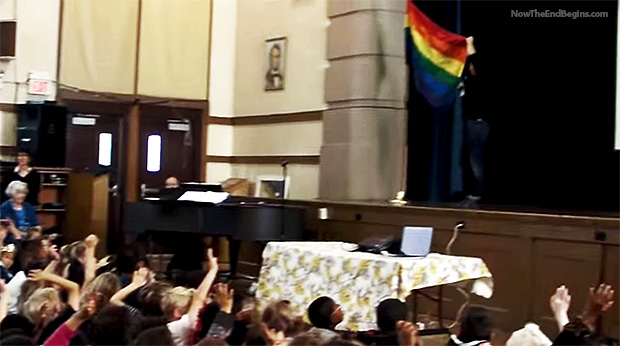 Forcing the degenerate values of the queer community on school children

The Queer community (as they call themselves in the video) have become hyper-aggressive with the advent of their main spokesperson in the White House. Newsweek called Barack Obama the “first gay president“, an ironically-accurate title in more ways that one. The LGBTQ know that now is their time to make as much progress as possible, and they have come out swinging for the fences.

Glenview Elementary school in Oakland, California, is leading the way in rolling out what looks like a mental conditioning  program that will soon be popping up in government schools all across the country. Young children, as seen in this video, are extremely impressionable, and will think and feel as you tell them they should. It is absolutely heartbreaking to watch as an entire school assembly is used to shamelessly force these young minds and hearts to accept and embrace what God has called an abomination in His word.

Parents had no idea that a mandatory assembly to promote gay pride was taking place. and many were justly outraged. It wasn’t until the children came  home with rainbow book-markers that they were able to piece together what had happened. The Glenview school is based on the Common Core standards which actively promote and indoctrinate the LGBTQ lifestyle into its’ students.

The question is, what will you do when this comes to your child’s school? The LGBTQ Mafia will stop at nothing to indoctrinate and recruit your child to be an advocate for the queer lifestyle. Will you have the courage to stand up and say “no”?