White House spokesman Jeff Tiller said the all gender restroom is in the Eisenhower executive office building where many employees have meetings and offices and is next door to... 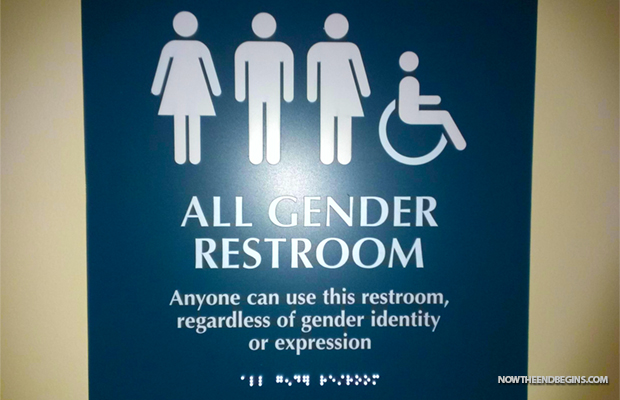 The White House has opened its first gender-neutral restroom in what is seen as a symbolic step by President Barack Obama to protect the rights of the lesbian, gay, bisexual and transgender LGBT community in the workplace.

EDITOR’S NOTE: Restrooms were never segregated because of discrimination, separate facilities for men and woman exist for personal safety and moral decency. But in Obama’s mongrel vision of a “no rules” America where anything goes, these natural protective barriers are being pulled down. Do you honestly want your 13 year old daughter using the restroom with middle-aged men and transgender and bisexual people? If you answer yes to that question, you need mental help.

White House spokesman Jeff Tiller said the all gender restroom is in the Eisenhower executive office building where many employees have meetings and offices and is next door to the West Wing, which houses the president’s offices.

The initiative is the latest in a series of actions by Obama to support the LGBT community. On Wednesday the president issued an executive order barring companies that do business with the federal government from discriminating against LGBT staff.

“The White House allows staff and guests to use restrooms consistent with their gender identity, which is in keeping with the administration’s existing legal guidance on this issue,” Tiller said.

Obama has taken a firm stand on gay, lesbian and transgender rights, an area of debate that is becoming hotly contested.

Last year, in a presidential first, he used the word “transgender” in the annual state of the union address and he has also endorsed same-sex marriage, marking what may be one of the most significant advances of his presidency.

Also on Wednesday Obama called for an end to psychiatric therapies that seek to change the sexual orientation of gay, lesbian and transgender youth, also known as conversion therapy.

The number of gender-neutral bathrooms has grown in the United States in recent years, in workplaces and in colleges, but the White House’s initiative comes as some US states mull legislation that would curtail transgender people’s ability to chose what restroom to use. source