In a public statement, influential Muslim cleric Yusuf al-Qaradawi told the Al-Jazeera TV network on Monday that any Libyan soldier who has the opportunity should shoot and kill Colonel... 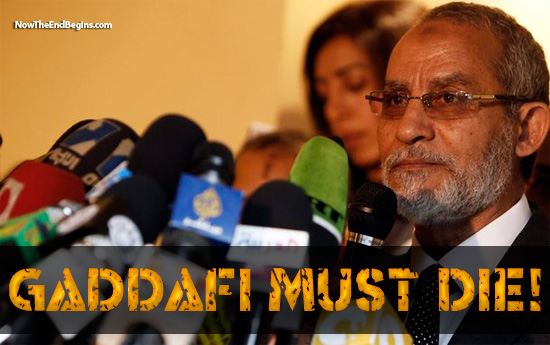 We have warned you from the very beginning of all these riots that the end result will be the rise of the Muslim Brotherhood, leading to a war with Israel. The Muslim Brotherhood will stop at nothing to remove any and all things standing in their way.

“In a public statement, influential Muslim cleric Yusuf al-Qaradawi told the Al-Jazeera TV network on Monday that any Libyan soldier who has the opportunity should shoot and kill Colonel Gaddafi.

Mohamed Badie, the leader of the Muslim Brotherhood, talks during a news conference in Cairo

Yusuf al-qaradawi is an Egyptian Islamic theologian, best known for his programme ” Shariah and Life” broadcast on the Al Jazeeera. He is also linked to Egyptian political organization, Muslim Brotherhood. Meanwhile, there were news rotating across the country that Gaddafi had fled to Caracas. While Venezuela’s Foreign Minister Nicolas Maduro has denied the reports, saying the Libyan leader remains in Tripoli.” source – All Voices