I hope every American who is in touch with reality will recognize Tom Cotton and the others who joined him for the courage and wisdom they have shown in... 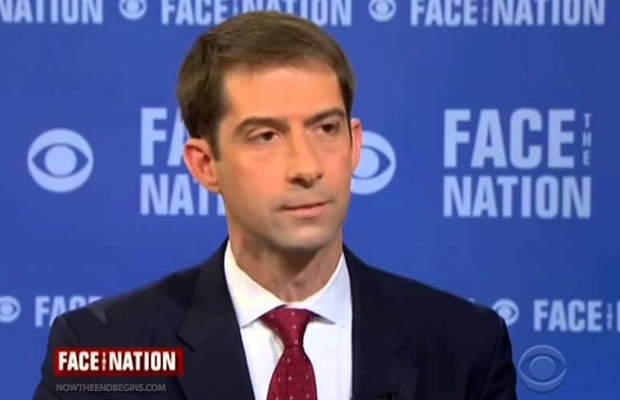 This NTEB Feature Story was contributed by Terry James, of Rapture Ready

Sen. Tom Cotton and the other patriots are accused of being traitors by exposing President Obama’s “bad deal,” as Israeli Prime Minister Benjamin Netanyahu called it in his speech to Congress on Tuesday, March 3.

EDITOR’S NOTE: Sen. Tom Cotton and 46 other GOP Senators did a bold, brave thing by exposing Obama’s duplicity to Iran’s leaders in the current Iran nuclear talks. Now they are branded being branded as “traitors” by the Liberal Left. It would seem that Anti-Americanism is the new patriotism in the Obama era.

Normally, I don’t like to get overly involved in the specifics of congressional matters. However, these courageous congressmen who are taking the full vitriol of liberal Democrats, mainstream press and liberal, pajama-boy social media types need to know that they are supported in what is perhaps the most dangerous threat the world has faced since the Cuban missile crisis –if Iran gets nuclear weapons and the capability to deliver them (which, they apparently already have).

God is in Control, but He expects us to make His Voice heard, especially in these crucial days involving Israel, I believe.

My own newspaper in Little Rock apparently refuses to print the following opinion piece I sent them, but instead printed many articles in opposition to Tom Cotton’s and the others’ letters opposing the terrible deal being made with Iran. This, despite Arkansas, in the mid-term elections, demonstrating that it is  the most conservative state in the union. Thus, I know the paper has received an overwhelming number of op-ed pieces favoring the courageous senators, but has refused to print them.

We can reach many more than that one newspaper as Christians, as long as we are allowed access to Internet.

John F. Kennedy, should he be suddenly allowed amongst the living, would have a tough time recognizing the party he once headed—the—in my view—now perverted party his brother, Ted, left in his wake.

The president who faced down Nikita Khrushchev during the missile crisis of October 1962, would, I’m convinced, be appalled at members in the Democrat Party calling “traitorous” patriots who would oppose America’s bitter enemies. That is what Democrats and their leftist, wooly-minded, blogging, sycophants are calling congressional leaders who copied the Iranian terrorist regime on a letter saying those congressmen would not support a go-ahead deal, allowing development of nuclear weapons with the Iranian leadership, blood-vowed to wipe both Israel and the U.S. off the globe.

Arkansas’ own newly elected senator, Tom Cotton—the senator who initiated the letter, joined by 46 other congressional members—is being subjected to every invective possible, magnified in its fervor a thousand times over by mainstream news and entertainment media. Cotton and the other patriots are accused of being traitors by exposing President Obama’s “bad deal,” as Israeli Prime Minister Benjamin Netanyahu called it in his speech to Congress on Tuesday, March 3.

The Democrats doing the name-calling in high-pitched squealing, like the proverbial stuck pig, conveniently forget the likes of Nancy Pelosi, Harry Reid, and John Kerry going to some of the world’s worst tyrants, in person, to try to thwart efforts of President George W. Bush. They conveniently forget JFK’s own brother, Edward M. Kennedy, back in the days of the Reagan Administration, going to the Soviet Union, in person, to assure then Premiere Yuri Andropov that he and the Democrat leadership would find ways to govern Ronald Reagan and his opposition to the Soviet regime’s designs on the rest of the world.

John F. Kennedy, if his most famous literary work was in truth his patriotic thought process manifested, would, I have little doubt, consider for inclusion Senator Tom Cotton in his work Profiles in Courage.

I hope every Arkansan who is in touch with reality (and the fact that we are perhaps the most politically conservative state in the union shows most are in touch with reality) will recognize Tom Cotton and the others who joined him for the courage and wisdom they have shown in the face of political and media hatreds those patriots have only begun to experience.

This NTEB Feature Story was contributed by Terry James, of Rapture Ready