Netanyahu And Obama On Collision Course 6 Years In The Making

For six years, President Barack Obama and Israeli Prime Minister Benjamin Netanyahu have been on a collision course over how to halt Iran's nuclear ambitions, a high-stakes endeavor both... 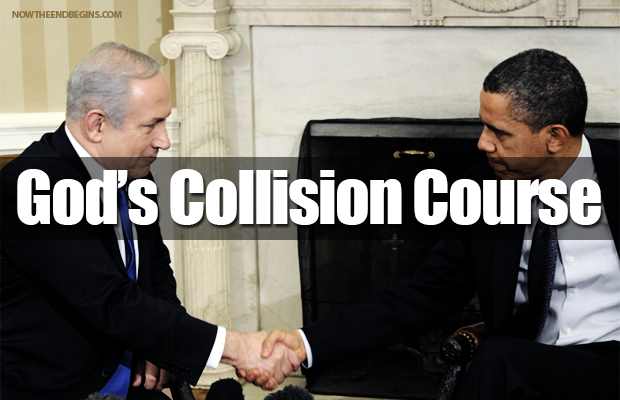 The age-old battle of good versus evil continues

“Daniel answered and said, Blessed be the name of God for ever and ever: for wisdom and might are his: And he changeth the times and the seasons: he removeth kings, and setteth up kings: he giveth wisdom unto the wise, and knowledge to them that know understanding:” Daniel 2:20,21 (KJV)

We believe that both Israeli Prime Minister Benjamin Netanyahu and American President Barack Hussein Obama were placed into the offices they hold by the will of Almighty God. Netanyahu as God’s man at the helm of Israel to steer her through troublous times, and Obama as the leader of the United States working from within to tear it down in a traitorous of betrayal. 2 very different men, both chosen by God, but for two very different reasons.

On Monday in Washington, DC, their two paths will cross in what promises to be an epic showdown. Obama is furious that Netanyahu has the audacity to confront him on Iran’s nuclear program, so look for all sorts of nasty little tricks up his sleeve.

For six years, President Barack Obama and Israeli Prime Minister Benjamin Netanyahu have been on a collision course over how to halt Iran’s nuclear ambitions, a high-stakes endeavor both men see as a centerpiece of their legacies.

The coming weeks will put the relationship between their countries, which otherwise remain stalwart allies, to one of its toughest tests.

Netanyahu is bound for Washington for an address to Congress on Tuesday aimed squarely at derailing Obama’s cherished bid for a diplomatic deal with Tehran. At the same time, Secretary of State John Kerry and other international negotiators will be in Switzerland for talks with the Iranians, trying for a framework agreement before a late March deadline.

In between are Israel’s elections March 17, which have heightened the political overtones of Netanyahu’s visit to Washington.

The prime minister is speaking to Congress at the request of Republicans. His visit was coordinated without the Obama administration’s knowledge, deepening tensions between two leaders who have never shown much affection for each other. source