Watch John Kerry and company slither and squirm their way through repeated denials that the US will be obligated to defend Iran against a strike.... 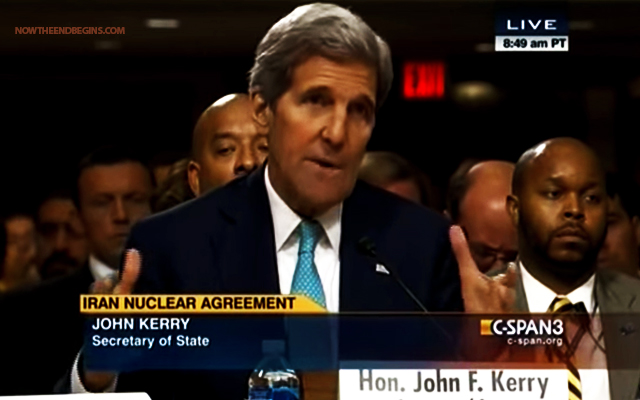 As bad as Iran is, Israel has a much greater enemy in the Obama administration who, obviously, is actively plotting against them. One of the clauses in the Obama Iranian Nuclear Deal is that it calls for the United States to defend Iran against any attacks from an outside country that would seek to sabotage their nuclear production.

Watch John Kerry and company slither and squirm their way through repeated denials that the US will be obligated to defend Iran against a strike. But Marco Rubio continues to press his point as he quotes directly from the document which forces Kerry to admit “we will just have to wait till we get to that point” to see what happens.

The audacity of Obama that he would dare work a deal in which the United States would be obligated to defend the terror-state of Iran is mind boggling. And doubly more so when you add the Israel factor into the mix. The only way to explain how the American people would ever tolerate this nightmare is that God has blinded us as a nation, and that His judgment upon us, in the form of Barack Obama, is leading us to national destruction. I don’t know of any other way to explain it.

From the time that Israel was re-gathered on May 14th, 1948, every sitting American president from Harry S. Truman to George W. Bush has worked to secure and strengthen Israel and her borders With the election of Barack Hussein Obama, all that changed.

We know that, in the end, Israel wins. But it comes at the overwhelming price of the Great Tribulation. We also know that America is not mentioned in Bible prophecy. I think it’s starting to become quite clear why we are not listed among the nations.

We are the enemy of Israel.