Iran Nuclear Deal Is Reached With World Powers EDITOR’S NOTE: First, let’s review. Barack Obama said that taxpayer  money would “never be used to fund abortion”, that was a... 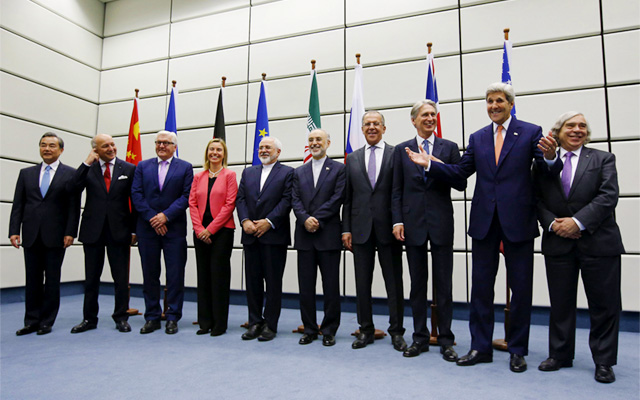 Delegates from Iran and a group of six nations led by the United States in Vienna on Tuesday after agreeing to an accord to significantly limit Tehran’s nuclear ability. Credit Pool photo by Carlos Barria
by Geoffrey Grider July 14, 2015
NOW THE END BEGINS SHARE:

VIENNA — Iran and a group of six nations led by the United States said they had reached a historic accord on Tuesday to significantly limit Tehran’s nuclear ability for more than a decade in return for lifting international oil and financial sanctions.

Delegates from Iran and a group of six nations led by the United States in Vienna on Tuesday after agreeing to an accord to significantly limit Tehran’s nuclear ability. Credit Pool photo by Carlos Barria

The deal culminates 20 months of negotiations on an agreement that President Obama had long sought as the biggest diplomatic achievement of his presidency. Whether it portends a new relationship between the United States and Iran — after decades of coups, hostage-taking, terrorism and sanctions — remains a bigger question.

President Obama, in an early morning appearance at the White House that was broadcast live in Iran, began what promised to be an arduous effort to sell the deal to Congress and the American public, saying the agreement was “not built on trust, it is built on verification.”

But Mr. Obama made it abundantly clear that he would fight to preserve the deal in its entirety, saying, “I will veto any legislation that prevents the successful implementation of this deal.

Not everyone was celebrating the accord. Israel’s prime minister, Benjamin Netanyahu, called it a “historic mistake” that would ultimately create a “terrorist nuclear superpower.” source