America’s favorite cookie is stirring up more than milk today after Kraft Foods posted a gay pride Oreo on the cookie’s Facebook page. Oreo posted the photoshopped picture of... 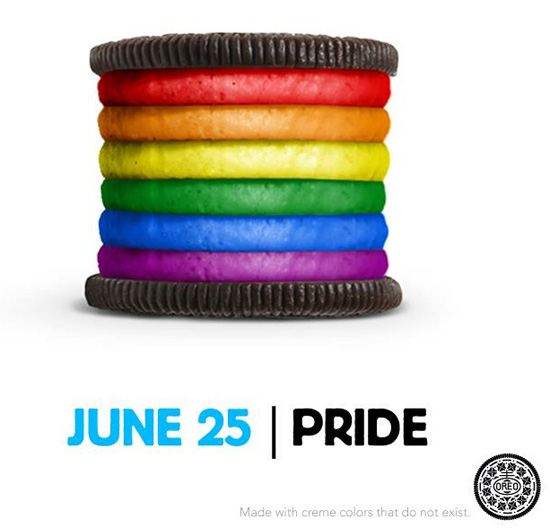 America’s favorite cookie is stirring up more than milk today after Kraft Foods posted a gay pride Oreo on the cookie’s Facebook page. Oreo posted the photoshopped picture of an Oreo cookie stuffed with rainbow-colored layers of frosting Monday evening with the caption “Proudly support love!”

“Disgusted with oreos,” wrote another. “Being gay is an abmonitation in God’s eyes i wont be buying them anymore.”

Basil Maglaris, a spokeswoman for Oreo’s parent company Kraft Foods, said in a statement that the image was part of a “series of daily ads reflecting current events in a fun way using images of OREO cookies and milk.” Kraft is not planning to sell the rainbow-stuffed Oreo in stores, Maglaris said, as it was created solely for the advertising campaign in honor of Pride month.

“We are excited to illustrate what is making history today in a fun and playful way,” she said in an email to ABC News. “As a company, Kraft Foods has a proud history of celebrating diversity and inclusiveness.  We feel the OREO ad is a fun reflection of our values.”

Other images in the Oreo ad campaign, which celebrates the cookie’s 100thbirthday, include a parody of the No. 1 hit song “Call Me Maybe,” depicting an Oreo and glass of milk next to tweaked lyrics.

“I just met you and this is crazy, but here’s some milk so dunk me maybe,” reads the ad,  also posted to the Oreo Facebook wall.

Oreo is the latest in a string of juggernaut brands to show support for the LGBT community.

In honor of Pride month Target launched a line of gay pride t-shirts, and the proceeds went to support the Family Equality Council, a Washington D.C.-based gay rights advocacy group. The pride shirts sold out in less than a month.

Ben & Jerry’s, a longtime supporter of LGBT causes, renamed its apple pie flavor “Apple-y Ever After” in scoop shops throughout the U.K. in March, while the British government was debating legalizing same sex marriages.