This says a lot about the Scouts and a lot about how far the gay rights movement has come in the United States.... 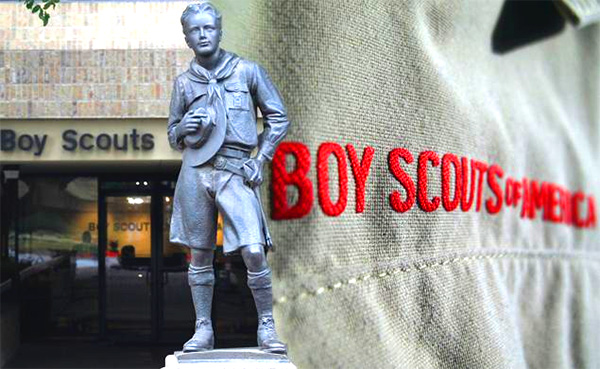 Well, Boy Scouts of America, you had a good run. Now take your place on the ash heap of history with all the other compromisers and liberals.
by Geoffrey Grider April 19, 2013
NOW THE END BEGINS SHARE:

“This know also, that in the last days perilous times shall come.” 2 Timothy 3:1

As a boy, I greatly enjoyed my time as a Boy Scout in Troop 38. I  learned a lot about life and being prepared in emergencies. My dad was one of the Scout leaders. This news breaks my heart, knowing that the Boy Scouts will now become an open breeding ground for the LGBT agenda. Will I allow my son to become a Boy Scout? Not for a million dollars…

From NY Daily News: The Boy Scouts of America called to end a long-standing ban on openly gay members, a spokesman said on Friday, but the organization’s board must still vote in May on whether to ratify the resolution.

Well, Boy Scouts of America, you had a good run. Now take your place on the ash heap of history with all the other compromisers, liberals and Laodicean Christians.

If the vote is approved, “no youth may be denied membership in the Boy Scouts of America on the basis of sexual orientation or preference alone,” Deron Smith, the organization’s spokesman, told Reuters.

Smith noted that the decision drew from three months of research, surveys and discussions and was “among the most complex and challenging issues facing the BSA and society today.”

The deliberations over whether to admit openly gay and lesbian members to the Boy Scouts has divided organizers, polarized its corporate and religious sponsors, and placed the group at the center of a nationwide debate over gay rights over the past two years.

“This is a historic change for the Boy Scouts,” said Patrick Boyle, whose 1994 book “Scout’s Honor” examined sexual abuse in the Boy Scouts of America.

“You have a more than hundred-year-old organization changing what it considered a fundamental belief just a decade ago. That says a lot about the Scouts and a lot about how far the gay rights movement has come in the United States.” source – NY Daily News