The Boy Scouts of America on Monday ended its blanket ban on gay adult leaders while allowing church-sponsored Scout units to maintain the exclusion for religious reasons.... 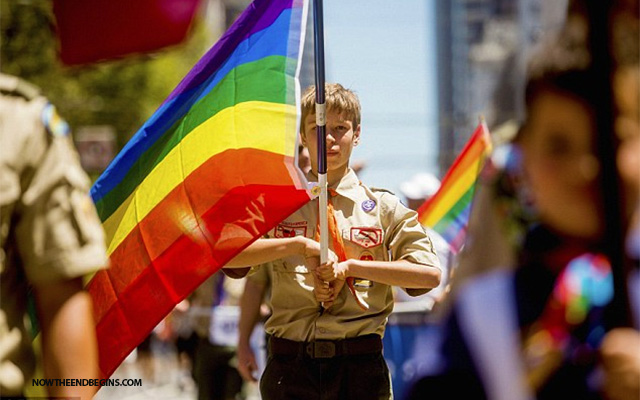 The Boy Scouts of America on Monday ended its blanket ban on gay adult leaders while allowing church-sponsored Scout units to maintain the exclusion for religious reasons.

EDITOR’S NOTE: I have many fond memories of being in Boy Scout Troop 38 as a teenager, scouting was a fun and informative time in my life. None of these great memories however, include the promotion of the same-sex marriage agenda. In 2015, the BSA has been hijacked by the LGBT Mafia, and as such, we call for an immediate nationwide boycott and rejection of the Boy Scouts of America. Where is the voice of the Christian Church in this nation to rise up and condemn this? I’ll tell you why, because the useless, silent, end times Laodicean Christian Church is too busy “asking for blessings” instead of standing on the Bible.

The new policy, aimed at easing a controversy that has embroiled the Boy Scouts for years, takes effect immediately. It was approved by the BSA’s National Executive Board on a 45-12 vote during a closed-to-the-media teleconference.

‘Now it’s time to unite behind our shared belief in the extraordinary power of Scouting to be a force for good.’ The stage had been set for Monday’s action on May 21, when Gates told the Scouts’ national meeting that the long-standing ban on participation by openly gay adults was no longer sustainable.

He said the ban was likely to be the target of lawsuits that the Scouts likely would lose.

Two weeks ago, the new policy was approved unanimously by the BSA’s 17-member National Executive Committee.

It would allow local Scout units to select adult leaders without regard to sexual orientation – a stance that several Scout councils have already adopted in defiance of the official national policy. In 2013, after heated internal debate, the BSA decided to allow openly gay youth as scouts, but not gay adults as leaders.

TRAIL LIFE, USA: The Christian alternative to the Boy Scouts of America. Trail Life, USA, is a Christian scouting group with Biblical values and a strong statement of faith. If you are the parent of a son in the BSA, we urge you to visit Trail Life USA and prayerfully consider making the switch today.

Several denominations that collectively sponsor close to half of all Scout units – including the Roman Catholic church, the Mormon church and the Southern Baptist Convention – have been apprehensive about ending the ban on gay adults. 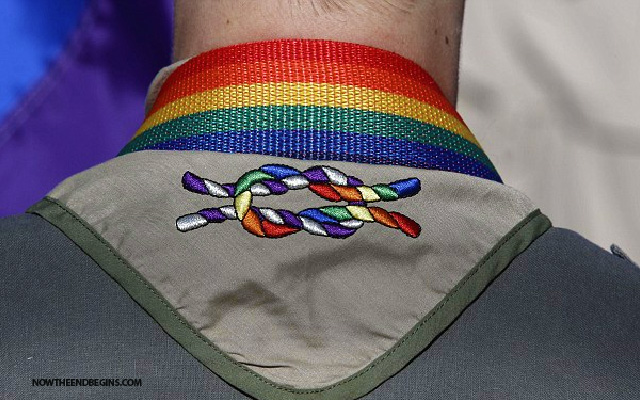 The Boy Scouts have an LGBT Merit Badge that scouts can earn by attending a Pride activity, PFLAG meeting, or an LGBT march/vigil. In the real world, this is known as indoctrination.

Stuart Upton, a lawyer for the LGBT-rights group Lambda Legal, questioned whether the BSA’s new policy to let church-sponsored units continue to exclude gay adults would be sustainable.

‘There will be a period of time where they’ll have some legal protection,’ Upton said. ‘But that doesn’t mean the lawsuits won’t keep coming… They will become increasingly marginalized from the direction society is going.’source