"For the first time in the history of the Boy Scouts, an openly gay adult will join their ranks as a camp counselor," he said. "Pascal Tessier was the... 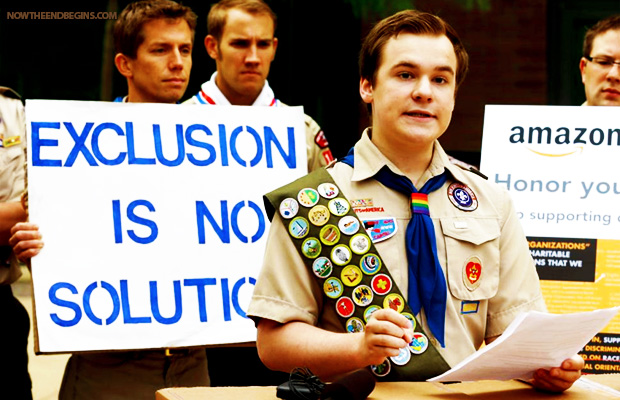 The LGBT Mafia has effectively ruined the Boy Scouts of America by forcing them to accept open homosexuals within their ranks. The Boy Scouts of America organization has caved into their demands, and will never be the same. I cannot fathom the idea of any Christian parent in America who would allow their young sons to be a Boy Scout now, knowing that they will be receiving subtle and overt homosexual indoctrination from the LGBT Movement.

“Pascal Tessier embodies the best qualities of an Eagle Scout, and of America,” said Boies, best known for leading the fight against California’s anti-gay marriage law. “Permitting him to continue his service to scouts and to scouting is the right decision for the Boy Scouts, and for our community.”

Zach Wahls of Scouts for Equality called it a “watershed moment.”

“For the first time in the history of the Boy Scouts, an openly gay adult will join their ranks as a camp counselor,” he said. “Pascal Tessier was the first out gay scout, and now it appears that he will also be the first out gay leader.”

Richard Mason, who serves on the board of the New York chapter, said they passed on Tessier’s application to the national board for vetting and “they have not rejected this young man.”

Mason said as far as he is concerned, Tessier is qualified to be a camp counselor.