A longtime advocate for equal rights, Ben & Jerry's UK has re-named its apple pie flavor "Apple-y Ever After" in support of gay marriage. This week, the UK... 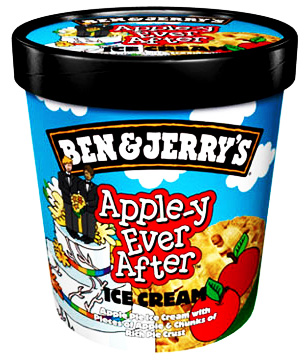 A longtime advocate for equal rights, Ben & Jerry’s UK has re-named its apple pie flavor “Apple-y Ever After” in support of gay marriage.  This week, the UK government is set to decide whether to make gay marriage legal.

Available in select stores in the UK, the limited-edition carton features two men atop a rainbow-detailed white cake.  The flavor features apple pie ice cream with apple chunks and pieces of pie crust.

The company has partnered with gay rights organization, Stonewall, and has launched a webpage as well as a Facebook fan page in support of its cause.

Facebook users have the option to “marry” on the page, along with the option to chose a partner and post your “marriage” on your Facebook feed as well as your photo.

In 2009 the brand renamed the flavor “Chubby Hubby” to “Hubby Hubby” in response to gay marriage legislation in Vermont.

“Apple-y Ever After” follows the recent controversy over Ben & Jerry’s limited-edition “Taste the Linsanity” flavor, for which the company later issued an apology. source – Yahoo News/GMA