Representatives from some of the most powerful labor unions in the country have arrived to march alongside the protesters, and students from New York universities joined the demonstrations this... 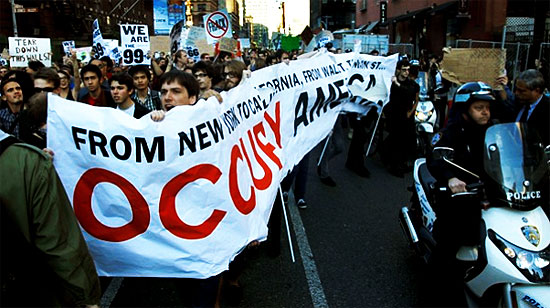 Representatives from some of the most powerful labor unions in the country have arrived to march alongside the protesters, and students from New York universities joined the demonstrations this afternoon.

The protests today — which were expected to be the largest yet — began at 3 p.m. Eastern, when protesters in Zuccotti Square marched a mile north to Foley Square, met community and labor leaders, and then marched back at 4:30 p.m. The march was largely peaceful, and metal barriers and police kept the demonstrations from blocking traffic.

Many protesters carried signs or joined in chants about economic injustice, including: “Wall St. can’t you see we want a fair economy!”

The reinforcements have added both size and credibility to the movement, which began Sept. 17 with a few dozen camped-out college students, and has voiced opposition against everything from corporate greed and bank foreclosures to the wars in Iraq and Afghanistan and unemployment. A full list of the protesters demands can be found here.