Reneging on its debt obligations would make the U.S. the first major Western government to default since Nazi Germany 80 years ago. Germany unilaterally ceased payments on long-term borrowings... 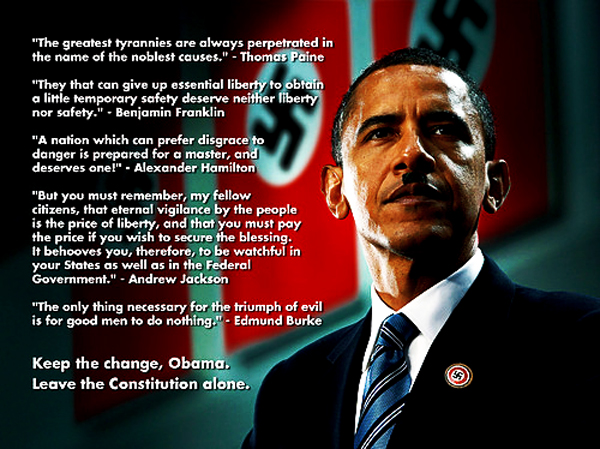 For four years now, we have been telling you and telling you, over and over, the astonishing parallels between the rise of Adolf Hitler and the rise of Barack Obama. We mapped out 13 similarities between Hitler and Obama that make our case clearly and concise. Now Bloomberg today puts out a story that Obama’s government would be the ONLY nation since Nazi Germany to declare default. Are you surprised…not even a little? Didn’t think you would be. Germany’s past is America’s future.

Like the Germans and Jews of 1933 Germany did with Hitler, we today in America are watching the rise of Barack Obama’s machine. The only question is, did we learn anything from history or are we it’s next victims?

From Bloomberg: Reneging on its debt obligations would make the U.S. the first major Western government to default since Nazi Germany 80 years ago.

Germany unilaterally ceased payments on long-term borrowings on May 6, 1933, three months after Adolf Hitler was installed as Chancellor. The default helped cement Hitler’s power base following years of political instability as the Weimar Republic struggled with its crushing debts.

The debt reparations piled onto Germany, which in 1913 was the world’s third-biggest economy, sparked the hyperinflation, borrowings and political deadlock that brought the Nazis to power, and the default. It shows how excessive debt has capricious results, such as the civil war and despotism that ravaged Florence after England’s Edward III refused to pay his obligations from the city-state’s banks in 1339, and the Revolution of 1789 that followed the French Crown’s defaults in 1770 and 1788.

Failure by the world’s biggest economy to pay its debt in an interconnected, globalized world risks an array of devastating consequences that could lay waste to stock markets from Brazil to Zurich and bring the $5 trillion market in Treasury-backed loans to a halt. Borrowing costs would soar, the dollar’s role as the world’s reserve currency would be in doubt and the U.S. and world economies would risk plunging into recession — and potentially depression.

Senate leaders of both parties are negotiating to avert a U.S. default after a lapse in borrowing authority takes effect Oct. 17, even as senators block legislation to prevent one and talks between the White House and House Republicans have hit an impasse. Democratic lawmakers said Oct. 12 that the lack of movement may have an effect on financial markets. After Oct. 17, the U.S. will have $30 billion plus incoming revenue and would start missing payments sometime between Oct. 22 and Oct. 31, according to the Congressional Budget Office.

Germany, staggering under the weight of 132 billion gold marks in war reparations and not permitted to export to the victors’ markets, was a serial defaulter from 1922, according to Albrecht Ritschl, a professor of economic history at the London School of Economics. That forced the country to borrow to pay its creditors, in what Ritschl calls a Ponzi scheme.

“Reparations were at the heart of the issue in the interwar years,” Ritschl said in a telephone interview. “The big question is why anyone lent a dime to Germany with those hanging over them. The assumption must have been that reparations would eventually go away.”

While a delinquent corporation may go out of business, be broken up, sold to a competitor, or otherwise change its shape, sovereign defaulters are different. Weimar Germany deferred payments, stopped transfers, reformed the currency and wrote down debt, wringing a series of agreements from its creditors before the Nazis repudiated the obligations in 1933.

It took until the 1953 London Debt Agreement to lay to rest the nation’s reparations difficulties, essentially by postponing any payments until after reunification in 1990 of East and West Germany, according to Timothy Guinnane, Professor of Economic History at Yale University in New Haven, Connecticut. The U.S., eager to ensure Germany was a bulwark against communism, pressured creditors to agree to debt relief, according to Guinnane.

“The U.S. was not being generous or magnanimous in the London Debt Agreement, it rarely is,” Guinnane said in an e-mail. “Rather, it understood that if Germany was forced to repay all the debts it technically owed, it would put the new Federal Republic under intolerable political and economic strain.”

Payments on about 150 million euros ($203 million) of bonds issued to fund reparations ended in October 2003, according to the Associated Press.

After sovereign defaults and before a nation is allowed to borrow again, some sort of repayment is typically made, Carmen Reinhart and Kenneth Rogoff wrote in their 2009 book on sovereign bankruptcies “This Time Is Different.” While Russia’s Bolshevik government refused to pay Tsarist debts, when the country re-entered debt markets it negotiated a token payment on the debt, according to the book.

Germany and France have both defaulted eight times since 1800, according to Reinhart and Rogoff. While Germany was sufficiently big and strategically important to be helped to peaceful prosperity by its creditors, default typically doesn’t end well for smaller nations.

Serial defaulters Argentina and Greece have retained political, if not economic independence. The Latin American nation failed to meet its commitments five times since 1951 and in 2001 gained the record for the largest-ever restructuring, a distinction it held until overtaken by Greece in 2012. Argentina’s bondholders are still pursuing the nation through the courts.

Including 2012, Greece has defaulted six times since 1826, three years before it gained independence, and has spent more than half the years since 1800 in default, according to Reinhart and Rogoff.

The biggest emerging-markets defaults in the past 15 years illustrate the cycle of contagion that typically marks sovereign debt crises.

Russia halted payments on $40 billion of local debt in 1998 after oil, its main export, plunged 42 percent amid a global economic slowdown triggered by the Asian financial crisis. By the time it devalued the ruble and defaulted that August, the government had drained about half its foreign reserves and made an unsuccessful bid to increase the $22.6 billion international aid package it had received.

Russia’s debt restructuring prompted investors to pull out of emerging markets, plunging Argentina into recession. By December 2001, when the South American country halted payments on $95 billion of bonds, the economy had contracted three successive years, cutting into tax revenue and pushing foreign reserves down to almost a six-year low.

Those defaults took place because events had rendered the nations insolvent, something that doesn’t apply to the U.S., said the LSE’s Ritschl. “The only situation that really parallels the U.S. situation at present is the U.S. situation,” he said. “There’s really no doubt about the solvency of the U.S. Treasury.” source – Bloomberg