Protesters, barricaded in a tent camp in Tahrir Square in the heart of Cairo, have vowed to stay until Mubarak quits and hope to take their campaign to the... 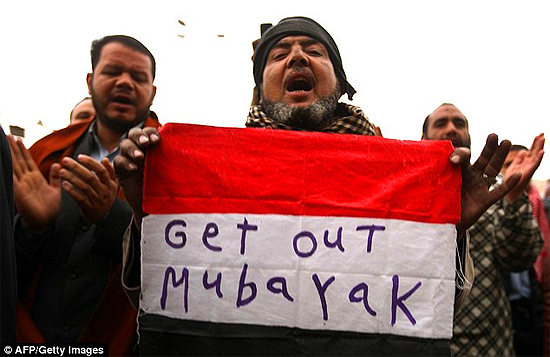 Rise of the Muslim Brotherhood

(Reuters) – President Hosni Mubarak’s new cabinet on Monday held its first full meeting since an uprising started nearly two weeks ago, with no concrete progress in talks with Islamists and an opposition who demand his immediate exit. Mubarak, 82, who has refused calls to end his 30-year-old presidency before September polls, saying his resignation would cause chaos in the Arab world’s most populous nation, has tried to focus on restoring order.

Protesters, barricaded in a tent camp in Tahrir Square in the heart of Cairo, have vowed to stay until Mubarak quits and hope to take their campaign to the streets with more mass demonstrations on Tuesday and Friday.

The banned Islamist Muslim Brotherhood movement was among the groups that met Egyptian government officials at the weekend, a sign of how much has already changed in an uprising that has rocked the Arab world and alarmed Western powers.

Opposition figures reported little progress in the talks. While protesters want Mubarak to step down immediately, many worry that when he does leave, he will be replaced not with the democracy they seek but with another authoritarian ruler.

With a government pledged to reform, an opposition with limited political experience, a constitutional process that mitigates against haste, and a key strategic role, Egypt’s next steps must be considered carefully, U.S. officials say. The opposition has made big gains in the past two weeks. source – Reuters