Up to 1,000 people were feared dead today after a powerful earthquake hit Turkey. The 7.2-magnitude tremor devastated parts of Van province in the east of the country, collapsing... 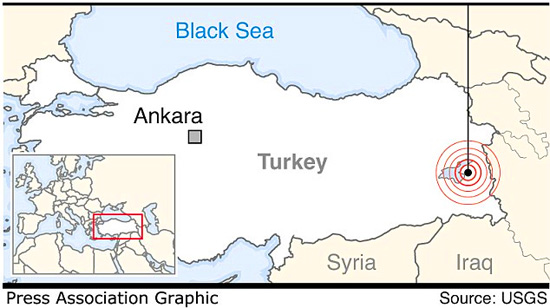 ‘We can hear the screams’: 1,000 feared dead in Turkish earthquake as scores of buildings collapse
Up to 1,000 people were feared dead today after a powerful earthquake hit Turkey. The 7.2-magnitude tremor devastated parts of Van province in the east of the country, collapsing dozens of buildings into piles of twisted steel and chunks of concrete.

Where did the terrorists freed in the Schalit go? Turkey. Ka-BOOM!

Desperate survivors dug into the rubble with their bare hands, trying to rescue the trapped and injured. The worst hit was Ercis, a town of 75,000 close to the Iranian border in one of Turkey’s most earthquake-prone zones. Twenty-five to 30 buildings collapsed including a dormitory.

At least 85 have been killed and 150 injured, but scientists estimated that up to 1,000 people could be dead, due to low housing standards in the area and the size of the quake.

Hospital staff in Ercis have been forced to treat injured people in the garden as the buildings were badly damaged.

Nurse Eda Ekizoglu told CNN: ‘The hospital has been badly damaged, so we can’t operate inside,

‘We’re giving care in the hospital garden and at a nearby building with a generator.

‘There should be more than 100 dead bodies left next to the hospital. We left them there because it’s dark and we didn’t want to step on bodies.’

An eight-storey building with shops underneath was flattened. Residents sobbed outside the ruins, hoping that missing relatives would be rescued.

CNN-Turk television showed one young man crying: ‘My wife and child are inside! My 4-month-old baby is inside!’ source – Daily Mail UK