CBS News reports that a large-scale attack may be imminent as al-Qaeda terrorists in the Arabian Peninsula already have their orders and could be in place for execution of... 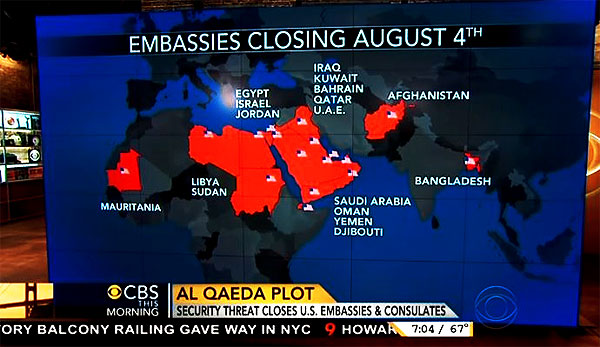 WASHINGTON (CBSDC/AP) — U.S. intelligence officials are dealing with the most credible terrorist threat in years as 19 diplomatic posts in the Middle East and Africa remain closed through this upcoming Saturday.

CBS News reports that a large-scale attack may be imminent as al-Qaeda terrorists in the Arabian Peninsula already have their orders and could be in place for execution of the alleged plot. Juan Zarate, a CBS News security analyst, says this recent plot is similar to one from 2010 in which several European sites were targeted.

“People were worried about Mumbai-style attacks coming from the al-Qaeda core,” Zarate said, adding, “It never materialized but officials were worried that they actually had operatives in place. And, that’s a great concern here.”

The State Department said 19 diplomatic posts will remain closed through Saturday “out of an abundance of caution.” State Department spokeswoman Jen Psaki said the decision to keep the embassies and consulates closed is “not an indication of a new threat.”

Diplomatic facilities will remain closed through Saturday in Egypt, Jordan, Libya, Saudi Arabia and Kuwait, among other countries.

In recent days, U.S. officials have said they have received significant and detailed intelligence suggesting a possible attack, with some clues pointing to the al-Qaeda terror network. The State Department said the potential for terrorism was particularly acute in the Middle East and North Africa, with a possible attack occurring on or coming from the Arabian Peninsula.

“The threat was specific as to how enormous it was going to be and also that certain dates were given,” Rep. Pete King, R-N.Y., who chairs a House panel on counterterrorism and intelligence, told ABC on Sunday.

King said he believes al-Qaeda “is in many ways stronger than it was before 9/11 because it has mutated and it’s spread in dramatically different locations.” The terror network’s Yemen branch, known as al-Qaeda in the Arabian Peninsula, “is the most deadly of all the al-Qaeda affiliates,” King said.

“The problem is you’ve had the rise of the al-Qaeda affiliates, groups in Yemen, North Africa, East Africa,” Zarate said. “Those groups have taken up the strategic and operational mantle for al-Qaeda and the group in Yemen has been the most dangerous because they want to hit the United States.”

Zarate also warned of the resurfacing of Ibrahim Hassan al-Asiri, the terror group’s top bomb maker, who was thought to have been killed in a drone strike last year.

“He’s innovative. You’ve seen in the last two plots that have come from al-Qaeda in the Arabian Peninsula that have targeted the United States the best innovation we’ve seen in terms of bomb making yet,” Zarate said. “You have techniques perhaps like surgically inserted bombs at play in this plot.”

Al-Asiri is accused of inventing the “underwear bomb” used by Umar Farouk Abdulmutallab on board a Christmas 2009 flight headed for Detroit and also the bombs placed inside printers shipped from Yemen by air freight in 2010. source – CBS Washington