The top right-leaning news aggregator, the Drudge Report, citing sources close to the Bloomberg team, reported that the former New York mayor is contemplating Clinton as a potential vice presidential running mate after his campaign's polling found the combination would go over well with voters. Earlier this month, Clinton said she isn’t running for president, but she reluctantly conceded an openness to being on someone else's ticket. "I never say never because I do believe in serving my country, but it’s not going to happen,” the 72-year-old told talk show host Ellen DeGeneres.

In a desperate attempt to create excitement within the Democrat Party, billionaire Mini Mike Bloomberg is toying with the idea of picking Crooked Hillary Clinton as his running mate., as revealed by the Drudge Report in an exclusive breaking news update. Is Bloomberg considering this because Hillary Clinton is the best candidate or because he even wants her as his running mate? No, Bloomberg is considering her because recent polling data says Democrats like the idea. Such is the state of the Democratic Party in 2020. 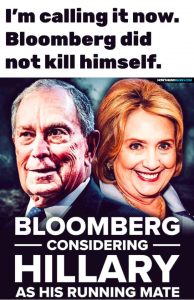 Granted, this is something that may fire up Democrats, but it’s not going to do much for mainstream America who is against abortion up to the due date, transgender rights, and all the other nonsense being touted by the Democratic Party in 2020.

But I must confess it would be very exciting to see Crooked Hillary Clinton lose yet again in her quest for the White House. So far, no official news yet from the Crooked Hillary Team as to whether or not she would accept the position of VP running mate to Mini Mike Bloomberg.

On a side note, if Mini Mike Bloomberg picks Crooked Hillary and somehow manages to win, the first person he better hire is a food taster, because he will be joining that Clinton Body Count in a heartbeat. Crooked Hillary wants nothing more than to be president, and will do anything to get it. Just ask Jeffrey Epstein who didn’t kill himself.

FROM THE DAILY MAIL UK: Mike Bloomberg is considering making Hillary Clinton his running mate, a source close to his campaign has told Drudge Report. Polling found the Bloomberg-Clinton combination would be a formidable force to take on Trump in the race for the White House, the source said.

Former New York City Mayor and Democratic candidate Bloomberg is said to be considering even changing his official residence from New York to Colorado or Florida – where he also has homes – because the electoral college makes it difficult for US president and vice-president to reside in the same state.

Under the Twelfth Amendment to the US Constitution, which provides the procedure for electing the president and vice-president, it states that the two people could not both inhabit the same state as the elector.

This comes as two new Democratic primary polls show Bloomberg in the lead in Florida, while Sen. Bernie Sanders tops the field in Texas. Both Bloomberg and Sanders have teeny tiny leads over former Vice President Joe Biden, who took a beating in both Iowa and New Hampshire. 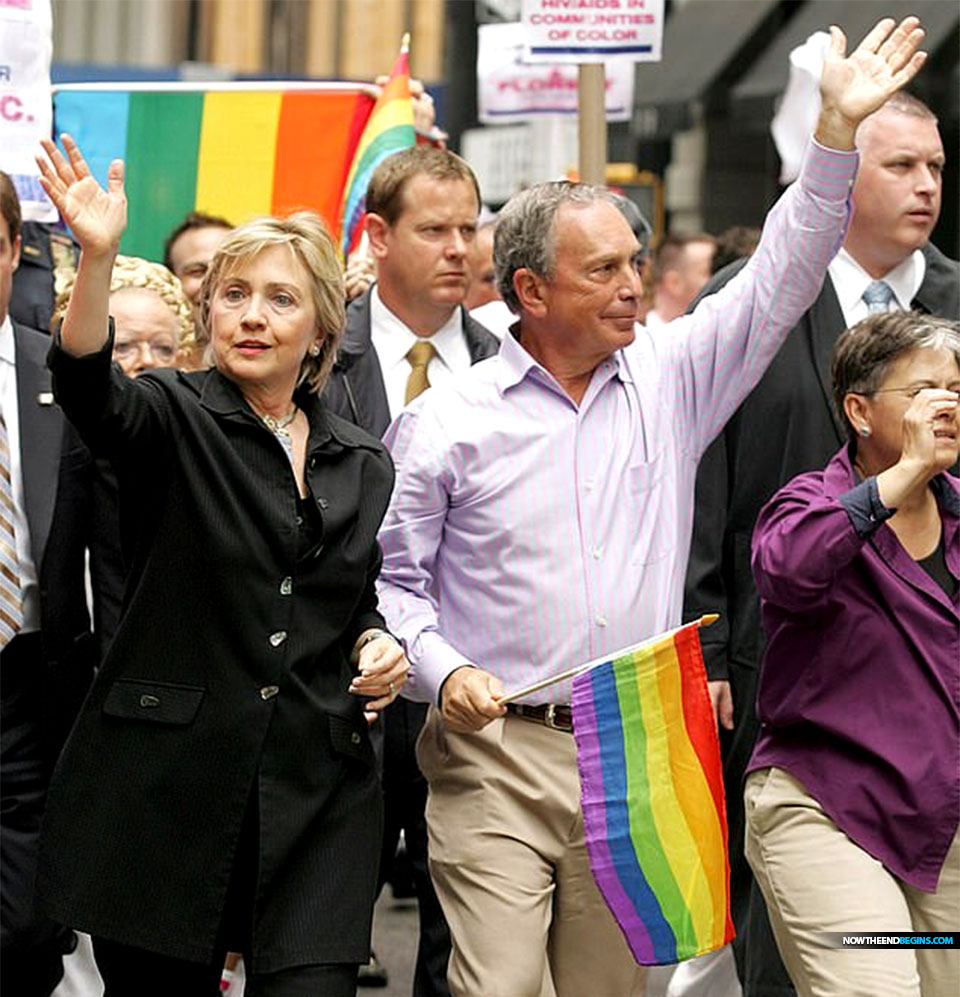 The Florida poll shows Bloomberg with just a one-point lead over Biden, with the ex-mayor receiving 27 per cent support from Florida Democrats compared to Biden’s 26 per cent support.

HOW MANY MORE WILL DIE TO PROTECT THE SECRETS OF CROOKED HILLARY CLINTON AND COMPANY?

Bloomberg’s edge comes from having about a 10-point lead over Biden among white survey respondents. The former mayor gets the support of 28 per cent of white Floridians,  versus the 18.5 per cent who selected Biden as their first choice for Democratic nominee.

Former first lady Clinton previously said she faced calls to run for president in 2020 after she lost out to Trump in the 2016 election, but she has repeatedly said she won’t join the race.

However, she stopped short of denying she was considering running for vice-president alongside one of the Democratic candidates earlier this month. ‘I never say never because I do believe in serving my country, but it’s not going to happen,’ she told Ellen DeGeneres. READ MORE

Van Jones Debate “Dispiriting, “Nothing I Saw Tonight” That Could Beat President Trump

Liberal CNN political contributor Van Jones shared his worries after the Democrat debate, noting that it was “dispiriting” for Democrats, and lamented “nothing I saw tonight” could beat President Donald Trump in 2020.

Democrats Trying To Find ‘Who Will Lose To Trump’ In 2020

Sky News host Paul Murray says the Democrats continue to “try and work out who is going to lose to Trump” in the upcoming presidential election, saying the candidates are in for “one heck of a fight” before a nominee emerges.