An organized group of atheists and some of the biggest voices from their movement will hold Reason Rally on The National Mall this weekend to raise awareness for their... 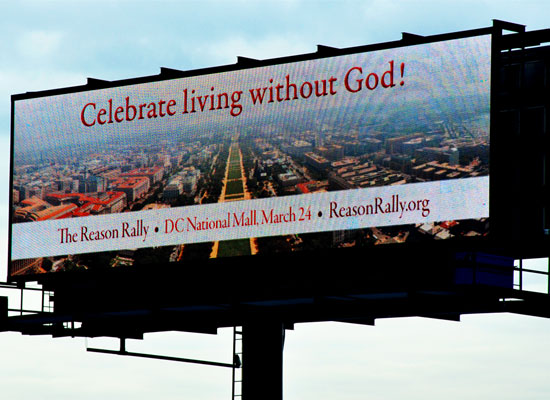 “Come now, and let us reason together, saith the LORD: though your sins be as scarlet, they shall be as white as snow; though they be red like crimson, they shall be as wool. If ye be willing and obedient, ye shall eat the good of the land: But if ye refuse and rebel, ye shall be devoured with the sword: for the mouth of the LORD hath spoken it.” Isaiah 1:18-20

The bible says in the above-quoted verse from the prophet Isaiah that God is a reasonable God, and invites men to reason things out with Him. He is more than will to cleanse us from our sins and from all our unrighteousness. But He also, in the same section, pronounces what the end of the unrepentant atheist will be, and it’s not pretty.

From Yahoo News: An organized group of atheists and some of the biggest voices from their movement will hold Reason Rally on The National Mall this weekend to raise awareness for their cause and to encourage members of Congress to respect their views.

The reasonrally.org website bills the event as the 'largest gathering of the secular movement in world history'.

“We need to stress to the theists that we are here,” David Silverman, chairman of the rally committee and president of the American Atheists, told CNN’s Belief Blog. “Atheism is growing in all 50 states. What people don’t seem to understand is all we demand at American Atheists is equality.”

Oxford Professor Richard Dawkins, arguably the most famous living atheist in the world, will headline the Reason Rally. Dawkins says he hopes the event will pressure members of Congress to respect the views of nonbelievers in America.

“The nonbelieving constituency has not been vocal enough, and it therefore has been politic for them to be ignored by their congressmen, by their senators,” Dawkins said.

The event is advertised as the largest gathering of atheists in history, but reports of a gloomy weather forecast could significantly reduce the rally’s participants. The National Parks Service says it is prepared for up to 30,000 participants, but Silverman told CNN that rain could cut that number down to 5,000.

Todd Stiefel, Founder of the Stiefel Freethought Foundation, is helping to cover about half of the event’s estimated $300,000 in expenses.

And while there are plenty of critics of atheism, CNN reports the only group to have officially registered for a competing spot of land to protest the rally is the Westboro Baptist Church, a group infamous for its picketing of funerals of American servicemen and servicewomen. source – Yahoo News