On March 21st, CNN aired a program called The Friendly Atheists Next Door. March 22nd, viewers were treated to What Type of Atheist Would You Be? On March 23rd,... 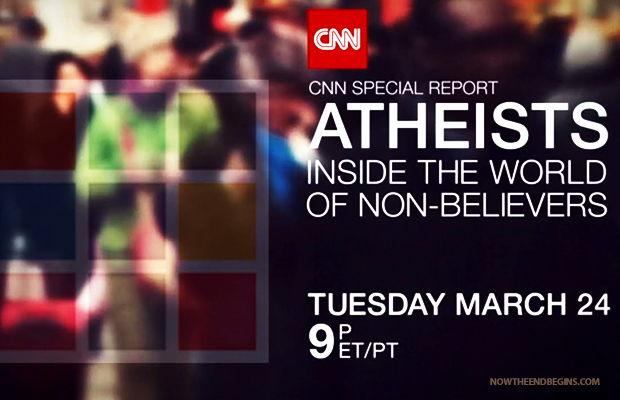 “I’m Ron Reagan, an unabashed atheist, and I am not afraid of burning in Hell”

“The fool hath said in his heart, There is no God. They are corrupt, they have done abominable works, there is none that doeth good.” Psalm 14:1 (KJV)

CNN, has apparently changed the meaning of their initials from the “Clinton News Network” to the “Christ Negation Network.” They’ve got an atheistic bee in their bonnet and are have been on a tear the last few days, featuring programs that support the notion that there is no God.

For instance, on March 21st, they aired a program called The Friendly Atheists Next Door. March 22nd, viewers were treated to What Type of Atheist Would You Be? On March 23rd, they aired Examining the Stigma of Atheism. Earlier today, March 24th, they featured a story about a former pastor turned atheist in which he shares his message of nonbelief.

This evening, they showed a “Special Broadcast” Atheist: Inside the World of Non-Believers. To kick off this sophomoric effort to mock and deny the Creator of heaven and earth, Ron Reagan, the son of President Ronald Reagan, taped the following commercial message:

“I’m Ron Reagan, an unabashed atheist, and I’m alarmed by the intrusion of religion into our secular government. That’s why I’m asking you to support the Freedom from Religion Foundation, the nation’s largest and most effective association of atheists and agnostics, working to keep state and church separate, just like the Founding Fathers intended. Please support the Freedom from Religion Foundation—Ron Reagan. Lifelong atheist. Not afraid of burning in hell.”

“The fear of the Lord is the beginning of knowledge: but fools despise wisdom and instruction.” Proverbs 1:7 (KJV)

Let’s take a closer look at this farce of a commercial message. Ron Reagan states he is alarmed by the intrusion of religion into out secular government. HUH?! What parallel universe is this man inhabiting, because in my universe, the only ‘religion’ intruding into our secular government is Islam, but I highly doubt that’s what he’s referring to.

The Freedom From Religion Foundation’s Founder and President is Mikey Weinstein, a self-hating Jew who could very well be the most caustic, rabid Christian hater on the planet. Despite his denials, the Occupant’s administration has contacted him on several occasions asking him to serve as a ‘religious tolerance consultant,’ the irony of which is but a tiny glimpse of Obama’s mental illness. However, Mikey’s crown jewel is his organized attack on Christians in every branch of our armed forces.

He states “I founded the civil rights fighting organization the Military Religious Freedom Foundation (MRFF) to do one thing: fight those monsters who would tear down the Constitutionally-mandated wall separating church and state in the technologically most lethal entity ever created by humankind, the U.S. military.”

This charmer is the person responsible for the persecution of Christians in our military. Soldiers, officers, and even Chaplains have been disciplined, demoted and dishonorably discharged for the grievous crimes of sharing the Gospel of Jesus Christ with their fellow soldiers, displaying a Bible on their desk, openly praying, or failing to do a happy dance when asked if they support homosexuals.

U.S. Navy Chaplain, Dr. Wes Modder, a decorated minister who is highly respected by his superior officers, who has a spotless and exceptional record of military service, is facing career-ending punishment because he expressed his faith-based beliefs in private counseling sessions with sailors. If I remember correctly, these sailors were looking for him to endorse their sodomite relationship. When he was unable to do so, they complained.

This is just one example of the insanity our Christian service men and women now face, thanks to the influence of Mikey and his minions. He has stated “Today, we face incredibly well-funded gangs of fundamentalist Christian monsters who terrorize their fellow Americans by forcing their weaponized and twisted version of Christianity upon their helpless subordinates in our nation’s armed forces.”

He has also spewed “those evil, fundamentalist Christian creatures and their spiritual heirs have taken refuge behind flimsy, well-worn, gauze-like euphemistic facades such as ‘family values’ and ‘religious liberty.’

He views evangelical Christians as terrorists. “We are facing a national security threat in this country that is every bit as significant in magnitude, width and breadth internally as that presented externally by the now-resurgent Taliban and al-Qaeda…We are facing an absolute fundamentalist Christianization—a Talibanization—of the U.S. Marine Corps, Army, Navy and Air Force.”

Mikey honey, calm down and take your medication. Your carotid is bulging and you’re foaming at the mouth again. But I digress. Back to Ron Reagan. Again, Mr. Reagan is oh-so-concerned about the intrusion of religion into our secular government, and wants us to support Mikey’s Freedom from Religion Foundation so they can keep the state and church separate, just as the Founding Fathers intended.

Well Scooter, guess what? The phrase “separation of church and state” does not appear in any of our founding documents. Let’s examine the facts, shall we? The First Amendment states “Congress shall make no law respecting an establishment of religion or prohibiting the free exercise thereof…” Before the final wording of this amendment was approved, it was revised nearly a dozen times.

The discussions, which are recorded in the Congressional Records, reveal that the Founding Fathers did not want what they witnessed in England; they wanted Christianity to be America’s religion, but did not want a particular denomination to be dominant. This is clearly shown in subsequent court rulings, such as one in 1799.

In that case, the court declared “By our form of government, the Christian religion is the established religion; and all sects and denominations of Christians are placed on the same equal footing.” Shocked? You shouldn’t be. THAT is the truth of what the Founding Fathers designed for this nation.

In 1801, the Danbury Baptist Association of Connecticut heard a rumor that the Congregationalist denomination was about to be made the national denomination, which upset the Baptists. They sent a letter to President Thomas Jefferson explaining their concerns, and he replied in a letter on January 1, 1802, reassuring them that “the First Amendment has erected a wall of separation between church and state.”

Since then, this phrase has been used by various groups attempting to throw every vestige of Christianity out of our government. One group in 1853 petitioned the House and Senate Judiciary Committee to remove chaplains from congress and the military.

The Committee came to the following conclusion: “At the time of the adoption of the Constitution and the amendments, the universal sentiment was that Christianity should be encouraged, but not any one sect. In this age, there is no substitute for Christianity. That was the religion of the founders of the republic, and they expected it to remain the religion of their descendants. The great, vital and conservative element in our system is the belief of our people in the pure doctrines and divine truths of the Gospel of Jesus Christ.”

However, in 1947, during the case of Everson v. Board of Education, the Supreme Court again looked to Jefferson’s letter, but this time, they took those eight words out of context, saying “The First Amendment has erected ‘a wall of separation between church and state.’ That wall must be kept high and impregnable.” And this twisting of Jefferson’s words took off from there.

Adolf Hitler’s master of propaganda, Joseph Goebbels, came up with a brilliant way to program the population of sheeple into believing what the government told them. “If you tell a lie big enough and keep repeating it, people will eventually come to believe it.” That is why very few people today challenge the whole concept of ‘separation of church and state.’ It’s been pounded into our heads since childhood.

Now you can see what a crock it is when the atheistic, God-hating progressives like Ron Reagan and Mikey Weinstein verbally vomit this phrase all over you. It’s a lie and was NOT what the Founding Fathers intended!

In his commercial, Ron states in a mocking voice that he’s not afraid of burning in hell. The Bible says people who hold the beliefs of Mikey and Ron are fools.

I shudder to think of their future, and pray the Lord is able to penetrate their hearts before they’re consigned to take a swan-dive into the Lake of Fire.

I am unabashedly politically incorrect! A sinner saved by the grace of Jesus Christ and His bondservant. I am married, with a 15-year-old son, two dogs, one cat and a bearded dragon. I work as a Hospice RN. Beware: I am not afraid to speak the truth!
SUBSCRIBE NOW