AtheistTV will be launching this summer with big plans to reach out to atheists, humanists, freethinkers, and folks who are looking for a way out of faith.... 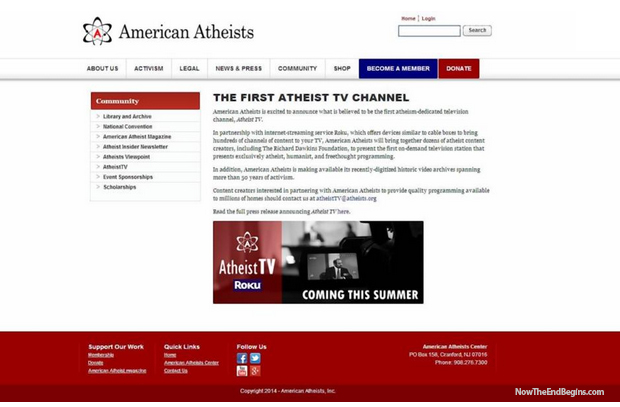 Since they’re first on the scene, American Atheists will face the challenge of defining what exactly godless programming will look like.
by Geoffrey Grider May 8, 2014
NOW THE END BEGINS SHARE:

“Therefore rejoice, ye heavens, and ye that dwell in them. Woe to the inhabiters of the earth and of the sea! for the devil is come down unto you, having great wrath, because he knoweth that he hath but a short time.” Revelation 12:12

AtheistTV will be launching this summer with big plans to reach out to atheists, humanists, freethinkers, and folks who are looking for a way out of faith. Members of American Atheists, the organization behind the endeavor, think it’s about time.

Since they’re first on the scene, American Atheists will face the challenge of defining what exactly godless programming will look like.

“There’s a glut of religious TV programming out there, from televangelists to Christmas specials,” spokesman Dave Muscato told The News. “But there’s no atheist channel. We wanted to fill that void.”

American Atheists already has a production studio at their national headquarters in Cranford, N.J., where they film their public access cable show “Atheist Viewpoint.” The show is in its 20th season and is distributed to 50 markets across the country.

AtheistTV will make use of content from their homegrown show, as well as their archive of footage from the past 50 years of its activist history. But they’re also seeking to join forces with other content providers—non-profit secular organizations such as the Richard Dawkins Foundation and atheist YouTube stars with big fan bases.

Since they’re first on the scene, American Atheists will face the challenge of defining what exactly godless programming will look like. “We’ll have shows about philosophy, science, history,” Muscato said. “A critical examination of the facts.”

Muscato also hopes the channel fill encourage people who are doubting their faith to come out as atheist. “When somebody leaves their religion, they don’t necessarily know everything about the Big Bang,” Muscato said. “This will fill in the gaps in knowledge that pastors have left behind.” source – NY Daily News