Atheist activists are taking their campaigns to the Bible Belt this Christmas with a provocative billboard campaign that is expected to stir controversy in America's religious heartlands.... 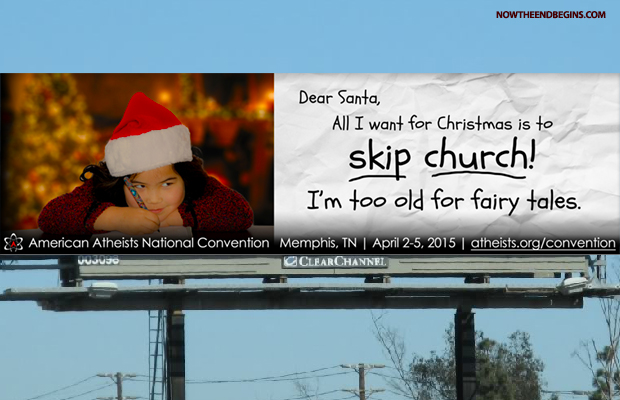 Atheist activists are taking their campaigns to the Bible Belt this Christmas with a provocative billboard campaign that is expected to stir controversy in America’s religious heartlands.

“The fool hath said in his heart, There is no God. Corrupt are they, and have done abominable iniquity: there is none that doeth good.” Psalm 53:1

The giant advertising hoardings in the Tennessee cities of Memphis, Nashville, St. Louis and Fort Smith, Arkansas show a mischievous-looking young girl writing her letter to Father Christmas: “Dear Santa, All I want for Christmas is to skip church! I’m too old for fairy tales,” she writes.

The advertising campaign by the American Atheists group will run until Christmas Eve and is the first time the group has aimed its anti-God adverts directly at residential religious areas, having previously targeted urban audiences in big venues such as Times Square in New York.

“Today’s adults have no obligation to pretend to believe the lies their parents believed. It’s OK to admit that your parents were wrong about God, and it’s definitely OK to tell your children the truth,” said David Silverman, the group’s president, as he launched the campaign.

In a sign of the hostility the adverts are expected to generate, American Atheists said that it had failed secure a single billboard site in Jackson, Mississippi after leasing companies collectively refused to offer space, fearing a community backlash.

“The fact that billboard companies would turn away business because they are so concerned about the reaction by the community shows just how much education and activism on behalf of atheists is needed in the South,” added Danielle Muscato, the group’s spokesperson.

America remains deeply religious relative to Europe, with not a single self-professed atheist among the 535 members of the US Congress. US presidential candidates are also expected to believe in God.

Read the rest of this story on the Telegraph UK…