5,000 Outraged Texans Join Rally in Support of Christmas Scene After Atheists Called for its Removal

Up to 5,000 people joined a rally on Saturday in support of a Nativity scene in Texas that a Wisconsin-based atheist group wanted to take down. Nathan Lorick, the... 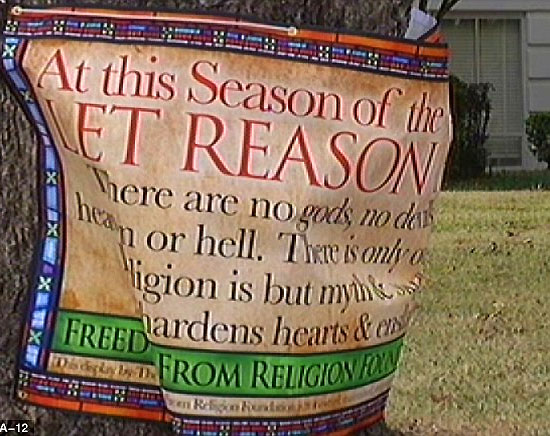 Response: Atheist group Freedom From Religion Foundation had a local volunteer hang the sign condemning the Nativity and the belief in Christ
by Geoffrey Grider December 19, 2011
NOW THE END BEGINS SHARE:

Up to 5,000 people joined a rally on Saturday in support of a Nativity scene in Texas that a Wisconsin-based atheist group wanted to take down. 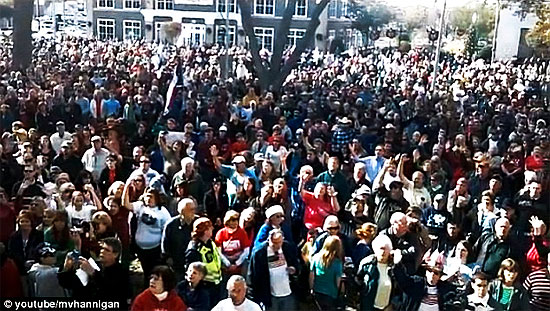 Peaceful protest: The pro-Nativity rally in Athens, Texas, that attracted a crowd of about 5,000 on Saturday

The atheist Freedom From Religion Foundation (FFRF) had sent a letter to authorities in Henderson County, Texas, saying that a local resident had complained and that the Nativity should be removed from the courthouse lawn in Athens.

Nathan Lorick, the pastor of the First Baptist Church in Malakoff and one of the organizers of Saturday’s rally in Athens, said: ‘We are humbled at the turnout of the crowd.’

‘We believe that God led us to do this and so we knew he was up to something great,” he told Fox News & Commentary.

‘This message is resonating in the hearts of people all over the country. This was a real statement to the nation that Christians are tired of the persecution and suppression.’

The FFRF said that for non-Christians, the Nativity sent a message of intimidation and exclusion. But their outcry in turn lead to anger through Texas.

The Texas Attorney General Greg Abbott sent out a ‘don’t mess with texas’ message and said he would defend the county if the atheists sued.

The FFRF sent a banner to the court house that it wanted displayed, with a very different message than the birth of Christ.

Response: Atheist group Freedom From Religion Foundation had a local volunteer hang the sign condemning the Nativity and the belief in Christ

The group’s banner read ‘At this season of the Winter Solstice, let reason prevail.’ ‘There are no gods, no devils, no angels, no heaven or hell. There is only our natural world. Religion is but a myth & superstition that hardens hearts & enslaves minds,’ it finished. source – Daily Mail UK