The political elites hate him and are spending millions to try and stop him. I will be honest, when Trump first said he was running I really didn't care and hardly followed it. But now in my 7th year of writing for NTEB, I have become quite adept at looking for the "story within the story" to try and get at the truth. When I saw the hatred for Trump, not just from the loony Left but from the Republicans and Conservatives, I have to tell you my ears perked up. "Why did they hate him so much?", I wondered. Then it became clear.

Donald Trump will give the elites and the Establishment absolute fits from his first day in office, and I find that prospect very satisfying

First off, to all my many friends I know that this article is not necessary because you know my heart. Your friendship and support is so very dear to me. To my many critics who rarely read much more than the headlines before commenting, I know that no explanation will satisfy so consider this article more of your necessary fuel to continue criticizing.

“Righteousness exalteth a nation: but sin is a reproach to any people.” Proverbs 14:34 (KJV)

And lastly, to Donald Trump, I know this is not the type of “endorsement” you will want to have but please know that all of what I say here is spoken in love and truth. America needs a strong leader, and I truly feel that you will be that for this country.

Donald Trump is not a Christian. By his own testimony, Donald Trump is not born again and as such cannot be considered a Christian in any other way than in name only. Trump has never admitted to being a sinner in need of a Saviour, in fact he has said the opposite. NewsMax said “Donald Trump said Saturday that ‘I am not sure that I have’ ever asked God for forgiveness, telling the 2015 Iowa Family Leadership Summit that “I just go on and try to do a better job from there.” Donald Trump attends a Presbyterian church which is one of the most apostate, Laodicean pro-LGBT churches you could find. His attempts to quote the Bible ala the now infamous “two Corinthians” controversy at Liberty University is the stuff that viral tweets and videos are made of. That’s the bad stuff, let’s look at the positive side now.

But America is not a theocracy and we are not electing a pastor, right? Right. With Donald Trump in the White House we get someone who will be quite supportive to Christians, which will be a very welcome change after 8 years of having the “not Muslim” Barry Soetoro in the Oval Office. And just maybe, with all the Bible waving he does, one of these days someone in his inner circle might just get him to open that Bible and show him how to get saved.

Donald Trump has a nasty habit of swearing during speeches. Yep, I don’t like that one bit and cringe everytime I hear it. But after 8 years of Obama I have gotten quite used to cringing at comments coming out of Washington. Donald’s handlers need to fix this immediately. There is no plus side to this one. Are you listening, Donald?

The political elites hate him and are spending millions to try and stop him. I will be honest, when Trump first said he was running I really didn’t care and hardly followed it. But now in my 7th year of writing for NTEB, I have become quite adept at looking for the “story within the story” to try and get at the truth. When I saw the hatred for Trump, not just from the loony Left but from the Republicans and Conservatives, I have to tell you my ears perked up. “Why did they hate him so much?“, I wondered. Then it became clear. Trump is the anti-politician who cannot be bought because of his vast personal wealth, and he is also not a politician. He not only does not fit “the mold”, he seems to be quite intent on smashing the mold. Trump is a businessman who wants to not only make the deal but to make the deal work. The NWO elites hate him because he is not one of them. He will not toe the party line because he is not part of the party. He will give the elites and the Establishment absolute fits from his first day in office, and I find that prospect very satisfying.

If it were not for Donald Trump I would not be voting. When I decided to abstain from voting in the 2014 midterms, many people slammed me at the time for doing that. But I could not vote because a). I cannot vote Democrat, and b). there were NO Republicans I trusted. Not one. But Republicans did vote, in record numbers in fact. So much so that it was the largest Republican victory in the House and Senate for generations. But what changed? Nothing. Every, single one of those Republicans who said “vote us in and we will repeal Obamacare” failed to keep that promise. In short, they lied right to our faces and not only that, they made backroom deals with Obama at every possible opportunity. The debt has gone up $4 billion since they took over. You cannot blame all that on Obama. It was the Republicans who lied to us Conservatives, who tricked us with false and empty promises they never intended on keeping. And it is the Republicans who want to stop Trump because Trump will not be part of their mess. Interestingly, all my Republican friends who blasted me for not voting in 2014 came back later and told me I was right.

Kenneth Copeland Says Ted Cruz Has Been ‘Called & Anointed’ By God To Be The Next President:

When a Christian criminal and fraud like prosperity preacher Kenneth Copeland announces that you have been “anointed by God to be president”, you need to run the other way as fast as you can. Copeland is a crook who tells lies and deceives millions while he picks their pockets.

So why not Ted Cruz? Ted Cruz is a slick and smooth politician who will “go along to get along”, and have no problem playing the game. He says he is a born again Christian, yet he associates with Laodicean bottom feeders like Kenneth Copeland and Jesse Duplantis who he had “pray over him” and “anoint him” to be president. In the Iowa primaries, he had his campaign falsely issue the announcement that Ben Carson had dropped out in an attempt to garner Carson’s delegate. That is not only lying, it is stealing as well. So go ahead and blast Trump all you like for his speech and rough mannerisms, but I don’t see him doing anything like that. Ted Cruz is a Christian and should know better than to resort to slimey politicians tricks like that, yet somehow doesn’t. Ted Cruz to me represents the status quo, and that is not what this country needs right now.

“Daniel answered and said, Blessed be the name of God for ever and ever: for wisdom and might are his: And he changeth the times and the seasons: he removeth kings, and setteth up kings: he giveth wisdom unto the wise, and knowledge to them that know understanding:” Daniel 2:20,21 (KJV) 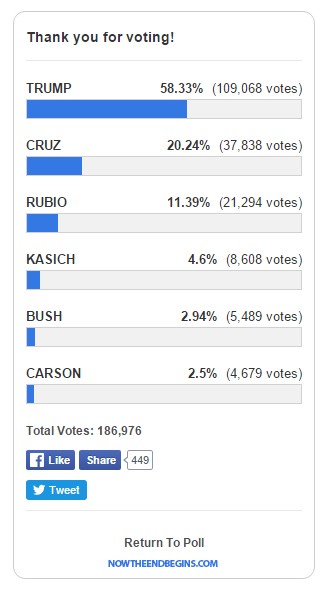 Donald Trump is not the perfect candidate, far from it. Donald Trump has many faults, as do all of the candidates on both sides running for office. But ultimately it is God who will install the man or woman that He wants to sit there to accomplish His purposes in these end times. I have said for the past 7 years that Obama was elected, twice, because God wanted him in there as a judgment on America. NTEB is not endorsing any candidate for president, as that is beyond the mandate of this ministry. I am voting for Donald Trump as a private citizen, but am not telling anyone else to do the same. But for all you Christian Republican haters of Trump out there, don’t be a hypocrite. If your conscience will not allow you to vote for Trump for the nomination, then you better either abstain or vote Democrat come November.

Predictions for the two cents they are worth. As I see it, Donald Trump will be the far-and-away winner for the Republican party nomination for president. Hands down. Then, should he survive the coming assassination attempt(s) on his life, he will easily win in November in a landslide. He, out of all the candidates, knows how to run billion dollar businesses, and will put things in place to restore our economy. Donald Trump will solve our current Muslim migrant problem here at home, and unleash the military to solve the ISIS problem outside of our borders.

Honestly, isn’t that what a president is supposed to do?

So Donald, drop me a line and let me open up a Bible and show you how you can be forgiven for all your sins by the shed blood of Jesus Christ. I will be more than happy to do that for the next president of the United States of America.