On the same day reports emerged of a new al Qaeda video that praised the revolutions sweeping the Arab world, one the U.S.'s top counter-terror officials warned the terror... 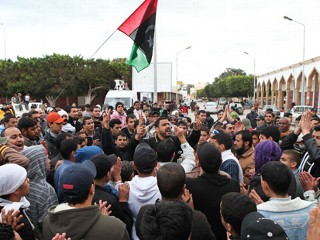 In this photo released by China's Xinhua News Agency, people attend a protest in the eastern Libyan town of Derna, Feb. 23, 2011.
by Geoffrey Grider April 17, 2011
NOW THE END BEGINS SHARE:

Racing towards the fulfillment of Psalm 83

The bible says that in the end of time, all the Muslim nations in the Middle East will regroup and form a confederacy whose sole purpose will be to atack Israel. It goes something like this – “For, lo, thine enemies make a tumult: and they that hate thee have lifted up the head. They have taken crafty counsel against thy people, and consulted against thy hidden ones. They have said, Come, and let us cut them off from [being] a nation; that the name of Israel may be no more in remembrance. For they have consulted together with one consent: they are confederate against thee: The tabernacles of Edom, and the Ishmaelites; of Moab, and the Hagarenes;” Psalm 83:2-6. What  you are seeing now id the fulfillment of that prophecy before your very eyes.

Al Qaeda and the Muslim Brotherhood on the rise

In this photo released by China's Xinhua News Agency, people attend a protest in the eastern Libyan town of Derna, Feb. 23, 2011.

On the same day reports emerged of a new al Qaeda video that praised the revolutions sweeping the Arab world, one the U.S.’s top counter-terror officials warned the terror organization “thrives” in the political unrest that follows. “The governments of Tunisia, Egypt, Libya and Yemen have drastically changed in the last six months,” FBI Assistant Director of Counter-Terrorism Mark Giuliano said Thursday. “They are now led by transitional or interim governments, military regimes, or democratic alliances with no established track record on counterterrorism efforts. Al Qaeda thrives in such conditions and countries of weak governance and political instability — countries in which governments may be sympathetic to their campaign of violence.”

Giuliano made the comments at the Washington Institute for Near East Policy just hours before the first reports emerged of the new al Qaeda video, which features separate appearances by al Qaeda’s number two commander, Ayman al-Zawahiri, and American-born key commander in al Qaeda in the Arabian Penninsula (AQAP), Anwar al-Awlaki, each praising the recent uprisings. In the hour-plus long video, al-Zawahiri orders Muslims in Egypt to create an Islamic state there and calls for the Arab armies of the Middle East to intervene in Libya to oust dictator Moammar Gadhafi before “Western aid… turns into invasions.” source – ABC News