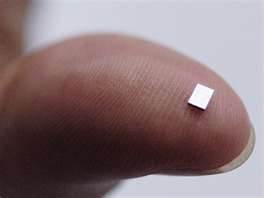 Although used in law enforcement and defense for several years, it has recently been used in civilian applications and shows some promise to reduce the number of duplicate cases in the Food Stamp Program (FSP) and other assistance programs .
by Geoffrey Grider May 31, 2012
NOW THE END BEGINS SHARE:

“And he causeth all, both small and great, rich and poor, free and bond, to receive a mark in their right hand, or in their foreheads: And that no man might buy or sell, save he that had the mark, or the name of the beast, or the number of his name.” (Revelation 13:16-17)

In a little while, the above scene in Revelation 13 will become a global reality. People can no longer buy or sell without the mark of the beast. And sometimes that would mean no longer being able to eat!

The USDA is now considering biometric identification for all individuals who will want to benefit from their Food and Nutrition Services. The RFID chip may just soon be a must for everyone who does not want to starve!

The following is an excerpt of the executive summary of the FINAL REPORT of the Use of Biometric Identification Technology to Reduce Fraud in the Food Stamp Program:

Although used in law enforcement and defense for several years, it has recently been used in civilian applications and shows some promise to reduce the number of duplicate cases in the Food Stamp Program (FSP) and other assistance programs .

Already operational in some states

Biometric identification systems are currently operational at some level in Arizona, California (under county initiative, first by Los Angeles County), Connecticut, Illinois, Massachusetts, New Jersey, New York, and Texas. Finger imaging is the principal form of technology used in all eight States, though alternative technologies have simultaneously undergone trials in Massachusetts (facial recognition) and Illinois (retinal scanning). By the end of 2000, new systems are expected to be in place in California (statewide unified system), Delaware, and North Carolina. Other States are currently in the initial planning stages, including Florida, Maryland, Michigan, Mississippi, Pennsylvania, and South Carolina. However, there is little information available at this point regarding the specific course and trajectory these States will follow in terms of system types, implementation schedules, and the benefit programs in which they will implement the new requirement.

The States planned for implementation of their biometric identification systems in response to a wide variety of factors and considerations idiosyncratic to each State environment. Some States reported that their respective legislative mandates, which prescribed specific dates by which biometric systems were required to be in place, allowed insufficient time for development and planning. The States developed and followed implementation schedules in accordance with internal priorities and considerations. The States uniformly described their implementation processes as largely uneventful, though they encountered a variety of minor implementation issues, most of which were associated with the logistical difficulties of mobilizing and managing such a complex initiative.

Preparing staff for the implementation of the biometric systems, both philosophically and operationally, took different forms, priorities, and levels of effort in the States. At implementation, advance notification to clients and/or the general public about new biometric client identification procedures was considered important by all State representatives. The objective of providing advance notification was to inform and prepare clients for the additional application or recertification step (i.e., to explain the requirement and who is required to submit, and to address client concerns), as well as to accelerate enrollment of the existing caseload. All States prepared informational mailings to clients advising them of the new requirement. Some States reported developing additional outreach media including multilingual (English and Spanish) videos, posters, and brochures for viewing and distribution in the local office. Most of the States also identified various outlets in the community through which they informed the general public in advance about the implementation of biometric client identification procedures.

The evaluations of finger imaging systems conducted by six States have produced the following findings.